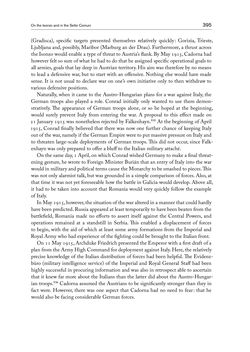 On﻿ the﻿ Isonzo﻿ and﻿ in﻿ the﻿ Sette﻿ Comuni 395 (Gradisca), specific targets presented themselves relatively quickly : Gorizia, Trieste, Ljubljana and, possibly, Maribor (Marburg an der Drau). Furthermore, a thrust across the Isonzo would enable a type of threat to Austria’s flank. By May 1915, Cadorna had however felt so sure of what he had to do that he assigned specific operational goals to all armies, goals that lay deep in Austrian territory. His aim was therefore by no means to lead a defensive war, but to start with an offensive. Nothing else would have made sense. It is not usual to declare war on one’s own initiative only to then withdraw to various defensive positions. Naturally, when it came to the Austro-Hungarian plans for a war against Italy, the German troops also played a role. Conrad initially only wanted to use them demon- stratively. The appearance of German troops alone, or so he hoped at the beginning, would surely prevent Italy from entering the war. A proposal to this effect made on 21 January 1915 was nonetheless rejected by Falkenhayn.935 At the beginning of April 1915, Conrad finally believed that there was now one further chance of keeping Italy out of the war, namely if the German Empire were to put massive pressure on Italy and to threaten large-scale deployments of German troops. This did not occur, since Falk- enhayn was only prepared to offer a bluff to the Italian military attaché. On the same day, 1 April, on which Conrad wished Germany to make a final threat- ening gesture, he wrote to Foreign Minister Burián that an entry of Italy into the war would in military and political terms cause the Monarchy to be smashed to pieces. This was not only alarmist talk, but was grounded in a simple comparison of forces. Also, at that time it was not yet foreseeable how the battle in Galicia would develop. Above all, it had to be taken into account that Romania would very quickly follow the example of Italy. In May 1915, however, the situation of the war altered in a manner that could hardly have been predicted. Russia appeared at least temporarily to have been beaten from the battlefield, Romania made no efforts to assert itself against the Central Powers, and operations remained at a standstill in Serbia. This enabled a displacement of forces to begin, with the aid of which at least some army formations from the Imperial and Royal Army who had experience of the fighting could be brought to the Italian front. On 11 May 1915, Archduke Friedrich presented the Emperor with a first draft of a plan from the Army High Command for deployment against Italy. Here, the relatively precise knowledge of the Italian distribution of forces had been helpful. The Evidenz- büro (military intelligence service) of the Imperial and Royal General Staff had been highly successful in procuring information and was also in retrospect able to ascertain that it knew far more about the Italians than the latter did about the Austro-Hungar- ian troops.936 Cadorna assumed the Austrians to be significantly stronger than they in fact were. However, there was one aspect that Cadorna had no need to fear : that he would also be facing considerable German forces.
zurück zum  Buch THE FIRST WORLD WAR - and the End of the Habsburg Monarchy, 1914 – 1918"
THE FIRST WORLD WAR and the End of the Habsburg Monarchy, 1914 – 1918
Entnommen aus der FWF-E-Book-Library