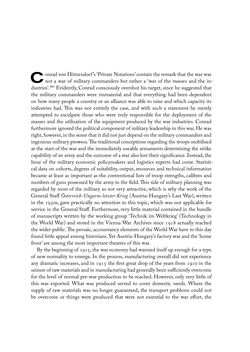 C onrad von Hötzendorf’s ‘Private Notations’ contain the remark that the war was not a war of military commanders but rather a ‘war of the masses and the in- dustries’.981 Evidently, Conrad consciously overshot his target, since he suggested that the military commanders were immaterial and that everything had been dependent on how many people a country or an alliance was able to raise and which capacity its industries had. This was not entirely the case, and with such a statement he merely attempted to exculpate those who were truly responsible for the deployment of the masses and the utilisation of the equipment produced by the war industries. Conrad furthermore ignored the political component of military leadership in this war. He was right, however, in the sense that it did not just depend on the military commanders and ingenious military prowess. The traditional conceptions regarding the troops mobilised at the start of the war and the immediately useable armaments determining the strike capability of an army and the outcome of a war also lost their significance. Instead, the hour of the military economic policymakers and logistics experts had come. Statisti- cal data on cohorts, degrees of suitability, output, resources and technical information became at least as important as the conventional lists of troop strengths, calibres and numbers of guns possessed by the army in the field. This side of military planning was regarded by most of the military as not very attractive, which is why the work of the General Staff Österreich-Ungarns letzter Krieg (Austria-Hungary’s Last War), written in the 1930s, gave practically no attention to this topic, which was not applicable for service in the General Staff. Furthermore, very little material contained in the bundle of manuscripts written by the working group ‘Technik im Weltkrieg’ (Technology in the World War) and stored in the Vienna War Archives since 1918 actually reached the wider public. The prosaic, accountancy elements of the World War have to this day found little appeal among historians. Yet Austria-Hungary’s factory war and the ‘home front’ are among the most important theatres of this war. By the beginning of 1915, the war economy had warmed itself up enough for a type of new normality to emerge. In the process, manufacturing overall did not experience any dramatic increases, and in 1915 the first great drop of the years from 1910 in the seizure of raw materials and in manufacturing had generally been sufficiently overcome for the level of normal pre-war production to be reached. However, only very little of this was exported. What was produced served to cover domestic needs. Where the supply of raw materials was no longer guaranteed, the transport problems could not be overcome or things were produced that were not essential to the war effort, the
zurück zum  Buch THE FIRST WORLD WAR - and the End of the Habsburg Monarchy, 1914 – 1918"
THE FIRST WORLD WAR and the End of the Habsburg Monarchy, 1914 – 1918
Entnommen aus der FWF-E-Book-Library