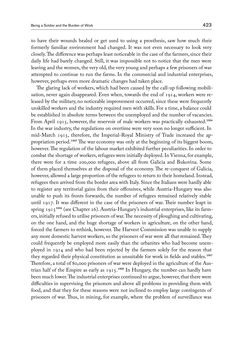 Being﻿ a﻿ Soldier﻿ and﻿ the﻿ Burden﻿ of﻿ Work 423 to have their wounds healed or get used to using a prosthesis, saw how much their formerly familiar environment had changed. It was not even necessary to look very closely. The difference was perhaps least noticeable in the case of the farmers, since their daily life had barely changed. Still, it was impossible not to notice that the men were leaving and the women, the very old, the very young and perhaps a few prisoners of war attempted to continue to run the farms. In the commercial and industrial enterprises, however, perhaps even more dramatic changes had taken place. The glaring lack of workers, which had been caused by the call-up following mobili- sation, never again disappeared. Even when, towards the end of 1914, workers were re- leased by the military, no noticeable improvement occurred, since these were frequently unskilled workers and the industry required men with skills. For a time, a balance could be established in absolute terms between the unemployed and the number of vacancies. From April 1915, however, the reservoir of male workers was practically exhausted.1004 In the war industry, the regulations on overtime were very soon no longer sufficient. In mid-March 1915, therefore, the Imperial-Royal Ministry of Trade increased the ap- propriation period.1005 The war economy was only at the beginning of its biggest boom, however. The regulation of the labour market exhibited further peculiarities. In order to combat the shortage of workers, refugees were initially deployed. In Vienna, for example, there were for a time 200,000 refugees, above all from Galicia and Bukovina. Some of them placed themselves at the disposal of the economy. The re-conquest of Galicia, however, allowed a large proportion of the refugees to return to their homeland. Instead, refugees then arrived from the border area with Italy. Since the Italians were hardly able to register any territorial gains from their offensives, while Austria-Hungary was also unable to push its fronts forwards, the number of refugees remained relatively stable until 1917. It was different in the case of the prisoners of war. Their number leapt in spring 19151006 (see Chapter 26). Austria-Hungary’s industrial enterprises, like its farm- ers, initially refused to utilise prisoners of war. The necessity of ploughing and cultivating, on the one hand, and the huge shortage of workers in agriculture, on the other hand, forced the farmers to rethink, however. The Harvest Commission was unable to supply any more domestic harvest workers, so the prisoners of war were all that remained. They could frequently be employed more easily than the urbanites who had become unem- ployed in 1914 and who had been rejected by the farmers solely for the reason that they regarded their physical constitution as unsuitable for work in fields and stables.1007 Therefore, a total of 80,000 prisoners of war were deployed in the agriculture of the Aus- trian half of the Empire as early as 1915.1008 In Hungary, the number can hardly have been much lower. The industrial enterprises continued to argue, however, that there were difficulties in supervising the prisoners and above all problems in providing them with food, and that they for these reasons were not inclined to employ large contingents of prisoners of war. Thus, in mining, for example, where the problem of surveillance was
zurück zum  Buch THE FIRST WORLD WAR - and the End of the Habsburg Monarchy, 1914 – 1918"
THE FIRST WORLD WAR and the End of the Habsburg Monarchy, 1914 – 1918
Entnommen aus der FWF-E-Book-Library