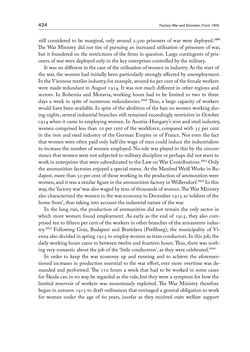 424 Factory War and Domestic Front, 1915 still considered to be marginal, only around 2,500 prisoners of war were deployed.1009 The War Ministry did not tire of pursuing an increased utilisation of prisoners of war, but it foundered on the restrictions of the firms in question. Large contingents of pris- oners of war were deployed only in the key enterprises controlled by the military. It was no different in the case of the utilisation of women in industry. At the start of the war, the women had initially been particularly strongly affected by unemployment. In the Viennese textiles industry, for example, around 60 per cent of the female workers were made redundant in August 1914. It was not much different in other regions and sectors. In Bohemia and Moravia, working hours had to be limited to two to three days a week in spite of numerous redundancies.1010 Thus, a large capacity of workers would have been available. In spite of the abolition of the ban on women working dur- ing nights, several industrial branches still remained exceedingly restrictive in October 1914 when it came to employing women. In Austria-Hungary’s iron and steel industry, women comprised less than 10 per cent of the workforce, compared with 35 per cent in the iron and steel industry of the German Empire or of France. Not even the fact that women were often paid only half the wage of men could induce the industrialists to increase the number of women employed. No role was played in this by the circum- stance that women were not subjected to military discipline or perhaps did not want to work in enterprises that were subordinated to the Law on War Contributions.1011 Only the ammunition factories enjoyed a special status. At the Manfred Weiß Works in Bu- dapest, more than 50 per cent of those working in the production of ammunition were women, and it was a similar figure in the ammunition factory in Wöllersdorf.1012 In this way, the ‘factory war’ was also waged by tens of thousands of women. The War Ministry also characterised the women in the war economy in December 1915 as ‘soldiers of the home front’, thus taking into account the industrial nature of the war. In the long run, the production of ammunition did not remain the only sector in which more women found employment. As early as the end of 1915, they also com- prised ten to fifteen per cent of the workers in other branches of the armaments indus- try.1013 Following Graz, Budapest and Bratislava (Preßburg), the municipality of Vi- enna also decided in spring 1915 to employ women as tram conductors. In this job, the daily working hours came to between twelve and fourteen hours. Thus, there was noth- ing very romantic about the job of the ‘little conductress’, as they were celebrated.1014 In order to keep the war economy up and running and to achieve the aforemen- tioned increases in production essential to the war effort, ever more overtime was de- manded and performed. The 110 hours a week that had to be worked in some cases for Škoda can in no way be regarded as the rule, but they were a symptom for how the limited reservoir of workers was monstrously exploited. The War Ministry therefore began in autumn 1915 to draft ordinances that envisaged a general obligation to work for women under the age of 60 years, insofar as they received state welfare support
zurück zum  Buch THE FIRST WORLD WAR - and the End of the Habsburg Monarchy, 1914 – 1918"
THE FIRST WORLD WAR and the End of the Habsburg Monarchy, 1914 – 1918
Entnommen aus der FWF-E-Book-Library