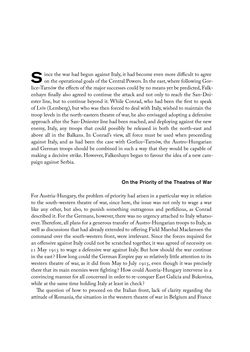 S ince the war had begun against Italy, it had become even more difficult to agree on the operational goals of the Central Powers. In the east, where following Gor- lice–Tarnów the effects of the major successes could by no means yet be predicted, Falk- enhayn finally also agreed to continue the attack and not only to reach the San-Dni- ester line, but to continue beyond it. While Conrad, who had been the first to speak of Lviv (Lemberg), but who was then forced to deal with Italy, wished to maintain the troop levels in the north-eastern theatre of war, he also envisaged adopting a defensive approach after the San-Dniester line had been reached, and deploying against the new enemy, Italy, any troops that could possibly be released in both the north-east and above all in the Balkans. In Conrad’s view, all force must be used when proceeding against Italy, and as had been the case with Gorlice–Tarnów, the Austro-Hungarian and German troops should be combined in such a way that they would be capable of making a decisive strike. However, Falkenhayn began to favour the idea of a new cam- paign against Serbia. On the Priority of the Theatres of War For Austria-Hungary, the problem of priority had arisen in a particular way in relation to the south-western theatre of war, since here, the issue was not only to wage a war like any other, but also, to punish something outrageous and perfidious, as Conrad described it. For the Germans, however, there was no urgency attached to Italy whatso- ever. Therefore, all plans for a generous transfer of Austro-Hungarian troops to Italy, as well as discussions that had already extended to offering Field Marshal Mackensen the command over the south-western front, were irrelevant. Since the forces required for an offensive against Italy could not be scratched together, it was agreed of necessity on 21 May 1915 to wage a defensive war against Italy. But how should the war continue in the east ? How long could the German Empire pay so relatively little attention to its western theatre of war, as it did from May to July 1915, even though it was precisely there that its main enemies were fighting ? How could Austria-Hungary intervene in a convincing manner for all concerned in order to re-conquer East Galicia and Bukovina, while at the same time holding Italy at least in check ? The question of how to proceed on the Italian front, lack of clarity regarding the attitude of Romania, the situation in the western theatre of war in Belgium and France
zurück zum  Buch THE FIRST WORLD WAR - and the End of the Habsburg Monarchy, 1914 – 1918"
THE FIRST WORLD WAR and the End of the Habsburg Monarchy, 1914 – 1918
Entnommen aus der FWF-E-Book-Library