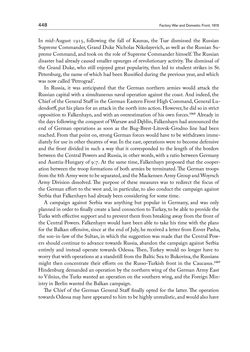 448 Factory War and Domestic Front, 1915 In mid-August 1915, following the fall of Kaunas, the Tsar dismissed the Russian Supreme Commander, Grand Duke Nicholas Nikolayevich, as well as the Russian Su- preme Command, and took on the role of Supreme Commander himself. The Russian disaster had already caused smaller upsurges of revolutionary activity. The dismissal of the Grand Duke, who still enjoyed great popularity, then led to student strikes in St. Petersburg, the name of which had been Russified during the previous year, and which was now called ‘Petrograd’. In Russia, it was anticipated that the German northern armies would attack the Russian capital with a simultaneous naval operation against the coast. And indeed, the Chief of the General Staff in the German Eastern Front High Command, General Lu- dendorff, put his plans for an attack in the north into action. However, he did so in strict opposition to Falkenhayn, and with an overestimation of his own forces.1068 Already in the days following the conquest of Warsaw and Dęblin, Falkenhayn had announced the end of German operations as soon as the Bug-Brest-Litovsk-Grodno line had been reached. From that point on, strong German forces would have to be withdrawn imme- diately for use in other theatres of war. In the east, operations were to become defensive and the front divided in such a way that it corresponded to the length of the borders between the Central Powers and Russia, in other words, with a ratio between Germany and Austria-Hungary of 9 :7. At the same time, Falkenhayn proposed that the cooper- ation between the troop formations of both armies be terminated. The German troops from the 8th Army were to be separated, and the Mackensen Army Group and Woyrsch Army Division dissolved. The purpose of these measures was to redirect the focus of the German effort to the west and, in particular, to also conduct the campaign against Serbia that Falkenhayn had already been considering for some time. A campaign against Serbia was anything but popular in Germany, and was only planned in order to finally create a land connection to Turkey, to be able to provide the Turks with effective support and to prevent them from breaking away from the front of the Central Powers. Falkenhayn would have been able to take his time with the plans for the Balkan offensive, since at the end of July, he received a letter from Enver Pasha, the son-in-law of the Sultan, in which the suggestion was made that the Central Pow- ers should continue to advance towards Russia, abandon the campaign against Serbia entirely and instead operate towards Odessa. Then, Turkey would no longer have to worry that with operations at a standstill from the Baltic Sea to Bukovina, the Russians might then concentrate their efforts on the Russo-Turkish front in the Caucasus.1069 Hindenburg demanded an operation by the northern wing of the German Army East to Vilnius, the Turks wanted an operation on the southern wing, and the Foreign Min- istry in Berlin wanted the Balkan campaign. The Chief of the German General Staff finally opted for the latter. The operation towards Odessa may have appeared to him to be highly unrealistic, and would also have
zurück zum  Buch THE FIRST WORLD WAR - and the End of the Habsburg Monarchy, 1914 – 1918"
THE FIRST WORLD WAR and the End of the Habsburg Monarchy, 1914 – 1918
Entnommen aus der FWF-E-Book-Library