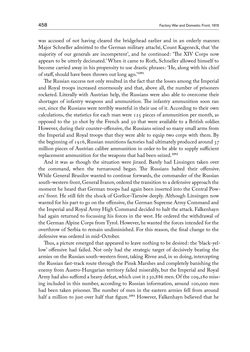 458 Factory War and Domestic Front, 1915 was accused of not having cleared the bridgehead earlier and in an orderly manner. Major Schneller admitted to the German military attaché, Count Kageneck, that ‘the majority of our generals are incompetent’, and he continued : ‘The XIV Corps now appears to be utterly decimated.’ When it came to Roth, Schneller allowed himself to become carried away in his propensity to use drastic phrases : ‘He, along with his chief of staff, should have been thrown out long ago.’1091 The Russian success not only resulted in the fact that the losses among the Imperial and Royal troops increased enormously and that, above all, the number of prisoners rocketed. Literally with Austrian help, the Russians were also able to overcome their shortages of infantry weapons and ammunition. The infantry ammunition soon ran out, since the Russians were terribly wasteful in their use of it. According to their own calculations, the statistics for each man were 125 pieces of ammunition per month, as opposed to the 30 shot by the French and 50 that were available to a British soldier. However, during their counter-offensive, the Russians seized so many small arms from the Imperial and Royal troops that they were able to equip two corps with them. By the beginning of 1916, Russian munitions factories had ultimately produced around 37 million pieces of Austrian calibre ammunition in order to be able to supply sufficient replacement ammunition for the weapons that had been seized.1092 And it was as though the situation were jinxed. Barely had Linsingen taken over the command, when the turnaround began. The Russians halted their offensive. While General Brusilov wanted to continue forwards, the commander of the Russian south-western front, General Ivanov, ordered the transition to a defensive approach the moment he heard that German troops had again been inserted into the Central Pow- ers’ front. He still felt the shock of Gorlice–Tarnów deeply. Although Linsingen now wanted for his part to go on the offensive, the German Supreme Army Command and the Imperial and Royal Army High Command decided to halt the attack. Falkenhayn had again returned to focussing his forces in the west. He ordered the withdrawal of the German Alpine Corps from Tyrol. However, he wanted the forces intended for the overthrow of Serbia to remain undiminished. For this reason, the final change to the defensive was ordered in mid-October. Thus, a picture emerged that appeared to leave nothing to be desired : the ‘black-yel- low’ offensive had failed. Not only had the strategic target of decisively beating the armies on the Russian south-western front, taking Rivne and, in so doing, intercepting the Russian fast-track route through the Pinsk Marshes and completely banishing the enemy from Austro-Hungarian territory failed miserably, but the Imperial and Royal Army had also suffered a heavy defeat, which cost it 230,886 men. Of the 109,280 miss- ing included in this number, according to Russian information, around 100,000 men had been taken prisoner. The number of men in the eastern armies fell from around half a million to just over half that figure.1093 However, Falkenhayn believed that he
zurück zum  Buch THE FIRST WORLD WAR - and the End of the Habsburg Monarchy, 1914 – 1918"
THE FIRST WORLD WAR and the End of the Habsburg Monarchy, 1914 – 1918
Entnommen aus der FWF-E-Book-Library