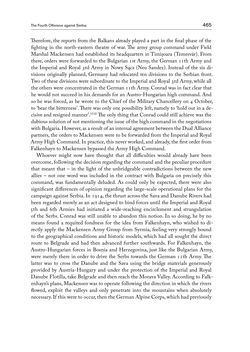 The﻿ Fourth﻿ Offensive﻿ against﻿ Serbia 465 Therefore, the reports from the Balkans already played a part in the final phase of the fighting in the north-eastern theatre of war. The army group command under Field Marshal Mackensen had established its headquarters in Timișoara (Temesvár). From there, orders were forwarded to the Bulgarian 1st Army, the German 11th Army and the Imperial and Royal 3rd Army in Nowy Sącz (Neu Sandez). Instead of the six di- visions originally planned, Germany had relocated ten divisions to the Serbian front. Two of these divisions were subordinate to the Imperial and Royal 3rd Army, while all the others were concentrated in the German 11th Army. Conrad was in fact clear that he would not succeed in his demands for an Austro-Hungarian high command. And so he was forced, as he wrote to the Chief of the Military Chancellery on 4 October, to ‘bear the bitterness’. There was only one possibility left, namely to ‘hold out in a de- cisive and resigned manner’.1112 The only thing that Conrad could still achieve was the dubious solution of not mentioning the issue of the high command in the negotiations with Bulgaria. However, as a result of an internal agreement between the Dual Alliance partners, the orders to Mackensen were to be forwarded from the Imperial and Royal Army High Command. In practice, this never worked, and already, the first order from Falkenhayn to Mackensen bypassed the Army High Command. Whoever might now have thought that all difficulties would already have been overcome, following the decision regarding the command and the peculiar procedure that meant that  – in the light of the unbridgeable contradictions between the new allies  – not one word was included in the contract with Bulgaria on precisely this command, was fundamentally deluded. As could only be expected, there were also significant differences of opinion regarding the large-scale operational plans for the campaign against Serbia. In 1914, the thrust across the Sava and Danube Rivers had been regarded merely as an act designed to bind forces until the Imperial and Royal 5th and 6th Armies had initiated a wide-reaching encirclement and strangulation of the Serbs. Conrad was still unable to abandon this notion. In so doing, he by no means found a requited fondness for the idea from Falkenhayn, who wished to di- rectly apply the Mackensen Army Group from Syrmia, feeling very strongly bound to the geographical conditions and historic models, which had all sought the direct route to Belgrade and had then advanced further southwards. For Falkenhayn, the Austro-Hungarian forces in Bosnia and Herzegovina, just like the Bulgarian Army, were merely there in order to drive the Serbs towards the German 11th Army. The latter was to cross the Danube and the Sava using the bridge materials generously provided by Austria-Hungary and under the protection of the Imperial and Royal Danube Flotilla, take Belgrade and then reach the Morava Valley. According to Falk- enhayn’s plans, Mackensen was to operate following the direction in which the rivers flowed, exploit the valleys and only penetrate into the mountains when absolutely necessary. If this were to occur, then the German Alpine Corps, which had previously
zurück zum  Buch THE FIRST WORLD WAR - and the End of the Habsburg Monarchy, 1914 – 1918"
THE FIRST WORLD WAR and the End of the Habsburg Monarchy, 1914 – 1918
Entnommen aus der FWF-E-Book-Library