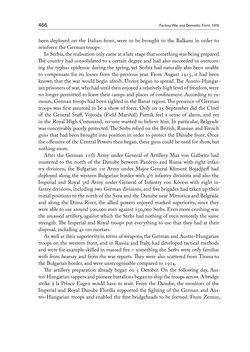 466 Factory War and Domestic Front, 1915 been deployed on the Italian front, were to be brought to the Balkans in order to reinforce the German troops. In Serbia, the realisation only came at a late stage that something was being prepared. The country had consolidated to a certain degree and had also succeeded in overcom- ing the typhus epidemic during the spring, yet Serbia had naturally also been unable to compensate for its losses from the previous year. From August 1915, it had been known that the war would begin afresh. Unrest began to spread. The Austro-Hungar- ian prisoners of war, who had until then enjoyed a relatively high level of freedom, were no longer permitted to leave their camps and places of confinement. According to ru- mours, German troops had been sighted in the Banat region. The presence of German troops was first assumed to be a show of force. Only on 25 September did the Chief of the General Staff, Vojvoda (Field Marshal) Putnik feel a sense of alarm, and yet in the Royal High Command, no-one wanted to believe him. In particular, Belgrade was conceivably poorly protected. The Serbs relied on the British, Russian and French guns that had been brought into position in order to protect the Danube front. Once the offensive of the Central Powers then began, these guns could be used for show, but nothing more. After the German 11th Army under General of Artillery Max von Gallwitz had mustered to the north of the Danube between Pančevo and Ruma with eight infan- try divisions, the Bulgarian 1st Army under Major General Kliment Bojadjieff had deployed along the western Bulgarian border with 4½ infantry divisions and also the Imperial and Royal 3rd Army under General of Infantry von Kövess with eight in- fantry divisions, including two German divisions, and five brigades had taken up their initial positions to the north of the Sava and the Danube near Mitrovica and Belgrade and along the Drina River, the allied powers enjoyed marked superiority, since they were able to use around 500,000 men against 250,000 Serbs. Even more crushing was the amassed artillery, against which the Serbs had nothing of even remotely the same strength. The Imperial and Royal troops put everything to use that they had at their disposal, including 42 cm mortars. As well as their superiority in terms of weapons, the German and Austro-Hungarian troops on the western front, and in Russia and Italy, had developed tactical methods and were for example skilled in massed fire  – something the Serbs were only familiar with from hearsay and from the war reports. They were also scattered from Tirana to the Bulgarian border, and were unrecognisable compared to 1914. The artillery preparation already began on 5 October. On the following day, Aus- tro-Hungarian sappers and pioneer battalions began to ship the troops across. A bridge strike à la Prince Eugen would have to wait. From the Danube, the monitors of the Imperial and Royal Danube Flotilla supported the fighting of the German and Aus- tro-Hungarian troops and enabled the first bridgeheads to be formed. From Zemun,
zurück zum  Buch THE FIRST WORLD WAR - and the End of the Habsburg Monarchy, 1914 – 1918"
THE FIRST WORLD WAR and the End of the Habsburg Monarchy, 1914 – 1918
Entnommen aus der FWF-E-Book-Library