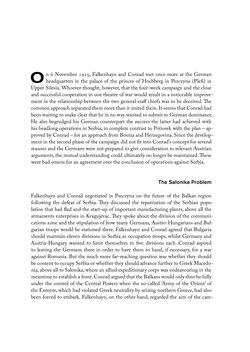 O n 6 November 1915, Falkenhayn and Conrad met once more at the German headquarters in the palace of the princes of Hochberg in Pszczyna (Pleß) in Upper Silesia. Whoever thought, however, that the four-week campaign and the close and successful cooperation in one theatre of war would result in a noticeable improve- ment in the relationship between the two general staff chiefs was to be deceived. The common approach separated them more than it united them. It seems that Conrad had been waiting to make clear that he in no way wanted to submit to German dominance. He also begrudged his German counterpart the success the latter had achieved with his headlong operations in Serbia, in complete contrast to Potiorek with the plan  – ap- proved by Conrad  – for an approach from Bosnia and Herzegovina. Since the develop- ment in the second phase of the campaign did not fit into Conrad’s concept for several reasons and the Germans were not prepared to give consideration to relevant Austrian arguments, the mutual understanding could ultimately no longer be maintained. These were bad omens for an agreement over the conclusion of operations against Serbia. The Salonika Problem Falkenhayn and Conrad negotiated in Pszczyna on the future of the Balkan region following the defeat of Serbia. They discussed the repatriation of the Serbian popu- lation that had fled and the start-up of important manufacturing plants, above all the armaments enterprises in Kragujevac. They spoke about the division of the communi- cations zone and the stipulation of how many Germans, Austro-Hungarians and Bul- garian troops would be stationed there. Falkenhayn and Conrad agreed that Bulgaria should maintain eleven divisions in Serbia as occupation troops, whilst Germany and Austria-Hungary wanted to limit themselves to five divisions each. Conrad aspired to leaving the Germans there in order to have them to hand, if necessary, for a war against Romania. But the much more far-reaching question was whether they should be content to occupy Serbia or whether they should advance further to Greek Macedo- nia, above all to Salonika, where an allied expeditionary corps was endeavouring in the meantime to establish a front. Conrad argued that the Balkans would only then be fully under the control of the Central Powers when the so-called ‘Army of the Orient’ of the Entente, which had violated Greek neutrality by seizing northern Greece, had also been forced to embark. Falkenhayn, on the other hand, regarded the aim of the cam-
zurück zum  Buch THE FIRST WORLD WAR - and the End of the Habsburg Monarchy, 1914 – 1918"
THE FIRST WORLD WAR and the End of the Habsburg Monarchy, 1914 – 1918
Entnommen aus der FWF-E-Book-Library