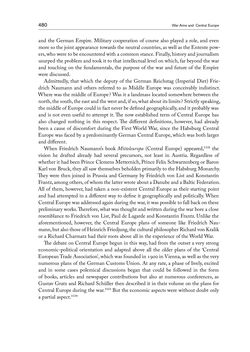 480 War Aims and Central Europe and the German Empire. Military cooperation of course also played a role, and even more so the joint appearance towards the neutral countries, as well as the Entente pow- ers, who were to be encountered with a common stance. Finally, history and journalism usurped the problem and took it to that intellectual level on which, far beyond the war and touching on the fundamentals, the purpose of the war and future of the Empire were discussed. Admittedly, that which the deputy of the German Reichstag (Imperial Diet) Frie- drich Naumann and others referred to as Middle Europe was conceivably indistinct. Where was the middle of Europe ? Was it a landmass located somewhere between the north, the south, the east and the west and, if so, what about its limits ? Strictly speaking, the middle of Europe could in fact never be defined geographically, and it probably was and is not even useful to attempt it. The now established term of Central Europe has also changed nothing in this respect. The different definitions, however, had already been a cause of discomfort during the First World War, since the Habsburg Central Europe was faced by a predominantly German Central Europe, which was both larger and different. When Friedrich Naumann’s book Mitteleuropa (Central Europe) appeared,1132 the vision he drafted already had several precursors, not least in Austria. Regardless of whether it had been Prince Clemens Metternich, Prince Felix Schwarzenberg or Baron Karl von Bruck, they all saw themselves beholden primarily to the Habsburg Monarchy. They were then joined in Prussia and Germany by Friedrich von List and Konstantin Frantz, among others, of whom the latter wrote about a Danube and a Baltic Federation. All of them, however, had taken a non-existent Central Europe as their starting point and had attempted in a different way to define it geographically and politically. When Central Europe was addressed again during the war, it was possible to fall back on these preliminary works. Therefore, what was thought and written during the war bore a close resemblance to Friedrich von List, Paul de Lagarde and Konstantin Frantz. Unlike the aforementioned, however, the Central Europe plans of someone like Friedrich Nau- mann, but also those of Heinrich Friedjung, the cultural philosopher Richard von Kralik or a Richard Charmatz had their roots above all in the experience of the World War. The debate on Central Europe begun in this way, had from the outset a very strong economic-political orientation and adapted above all the older plans of the ‘Central European Trade Association’, which was founded in 1900 in Vienna, as well as the very numerous plans of the German Customs Union. At any rate, a phase of lively, excited and in some cases polemical discussions began that could be followed in the form of books, articles and newspaper contributions but also at numerous conferences, as Gustav Gratz and Richard Schüller then described it in their volume on the plans for Central Europe during the war.1133 But the economic aspects were without doubt only a partial aspect.1134
zurück zum  Buch THE FIRST WORLD WAR - and the End of the Habsburg Monarchy, 1914 – 1918"
THE FIRST WORLD WAR and the End of the Habsburg Monarchy, 1914 – 1918
Entnommen aus der FWF-E-Book-Library