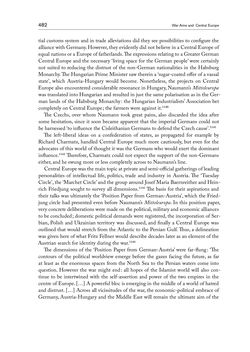 482 War Aims and Central Europe tial customs system and in trade alleviations did they see possibilities to configure the alliance with Germany. However, they evidently did not believe in a Central Europe of equal nations or a Europe of fatherlands. The expressions relating to a Greater German Central Europe and the necessary ‘living space for the German people’ were certainly not suited to reducing the distrust of the non-German nationalities in the Habsburg Monarchy. The Hungarian Prime Minister saw therein a ‘sugar-coated offer of a vassal state’, which Austria-Hungary would become. Nonetheless, the projects on Central Europe also encountered considerable resonance in Hungary, Naumann’s Mitteleuropa was translated into Hungarian and resulted in just the same polarisation as in the Ger- man lands of the Habsburg Monarchy : the Hungarian Industrialists’ Association bet completely on Central Europe ; the farmers were against it.1140 The Czechs, over whom Naumann took great pains, also discarded the idea after some hesitation, since it soon became apparent that the imperial Germans could not be harnessed ‘to influence the Cisleithanian Germans to defend the Czech cause’.1141 The left-liberal ideas on a confederation of states, as propagated for example by Richard Charmatz, handled Central Europe much more cautiously, but even for the advocates of this world of thought it was the Germans who would exert the dominant influence.1142 Therefore, Charmatz could not expect the support of the non-Germans either, and he swung more or less completely across to Naumann’s line. Central Europe was the main topic at private and semi-official gatherings of leading personalities of intellectual life, politics, trade and industry in Austria. The ‘Tuesday Circle’, the ‘Marchet Circle’ and the group around Josef Maria Baernreither and Hein- rich Friedjung sought to survey all dimensions.1143 The basis for their aspirations and their talks was ultimately the ‘Position Paper from German-Austria’, which the Fried- jung circle had presented even before Naumann’s Mitteleuropa. In this position paper, very concrete deliberations were made on the political, military and economic alliances to be concluded ; domestic political demands were registered, the incorporation of Ser- bian, Polish and Ukrainian territory was discussed, and finally a Central Europe was outlined that would stretch from the Atlantic to the Persian Gulf. Thus, a delineation was given here of what Fritz Fellner would describe decades later as an element of the Austrian search for identity during the war.1144 The dimensions of the ‘Position Paper from German-Austria’ were far-flung : ‘The contours of the political worldview emerge before the gazes facing the future, as far at least as the enormous spaces from the North Sea to the Persian waters come into question. However the war might end : all hopes of the Islamist world will also con- tinue to be intertwined with the self-assertion and power of the two empires in the centre of Europe. […] A powerful bloc is emerging in the middle of a world of hatred and distrust. […] Across all vicissitudes of the war, the economic-political embrace of Germany, Austria-Hungary and the Middle East will remain the ultimate aim of the
zurück zum  Buch THE FIRST WORLD WAR - and the End of the Habsburg Monarchy, 1914 – 1918"
THE FIRST WORLD WAR and the End of the Habsburg Monarchy, 1914 – 1918
Entnommen aus der FWF-E-Book-Library