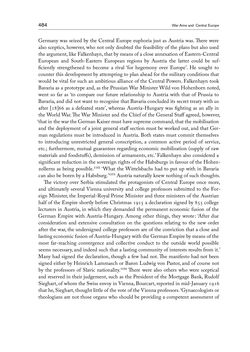 484 War Aims and Central Europe Germany was seized by the Central Europe euphoria just as Austria was. There were also sceptics, however, who not only doubted the feasibility of the plans but also used the argument, like Falkenhayn, that by means of a close annexation of Eastern-Central European and South-Eastern European regions by Austria the latter could be suf- ficiently strengthened to become a rival ‘for hegemony over Europe’. He sought to counter this development by attempting to plan ahead for the military conditions that would be vital for such an ambitious alliance of the Central Powers. Falkenhayn took Bavaria as a prototype and, as the Prussian War Minister Wild von Hohenborn noted, went so far as ‘to compare our future relationship to Austria with that of Prussia to Bavaria, and did not want to recognise that Bavaria concluded its secret treaty with us after [18]66 as a defeated state’, whereas Austria-Hungary was fighting as an ally in the World War. The War Minister and the Chief of the General Staff agreed, however, ‘that in the war the German Kaiser must have supreme command, that the mobilisation and the deployment of a joint general staff section must be worked out, and that Ger- man regulations must be introduced in Austria. Both states must commit themselves to introducing unrestricted general conscription, a common active period of service, etc.; furthermore, mutual guarantees regarding economic mobilisation (supply of raw materials and foodstuffs), demission of armaments, etc.’ Falkenhayn also considered a significant reduction in the sovereign rights of the Habsburgs in favour of the Hohen- zollerns as being possible.1152 ‘What the Wittelsbachs had to put up with in Bavaria can also be boren by a Habsburg.’1153 Austria naturally knew nothing of such thoughts. The victory over Serbia stimulated the protagonists of Central Europe once more, and ultimately several Vienna university and college professors submitted to the For- eign Minister, the Imperial-Royal Prime Minister and three ministers of the Austrian half of the Empire shortly before Christmas 1915 a declaration signed by 855 college lecturers in Austria, in which they demanded the permanent economic fusion of the German Empire with Austria-Hungary. Among other things, they wrote : ‘After due consideration and extensive consultation on the questions relating to the new order after the war, the undersigned college professors are of the conviction that a close and lasting economic fusion of Austria-Hungary with the German Empire by means of the most far-reaching convergence and collective conduct to the outside world possible seems necessary, and indeed such that a lasting community of interests results from it.’ Many had signed the declaration, though a few had not. The manifesto had not been signed either by Heinrich Lammasch or Baron Ludwig von Pastor, and of course not by the professors of Slavic nationality.1154 There were also others who were sceptical and reserved in their judgement, such as the President of the Mortgage Bank, Rudolf Sieghart, of whom the Swiss envoy in Vienna, Bourcart, reported in mid-January 1916 that he, Sieghart, thought little of the vote of the Vienna professors. ‘Gynaecologists or theologians are not those organs who should be providing a competent assessment of
zurück zum  Buch THE FIRST WORLD WAR - and the End of the Habsburg Monarchy, 1914 – 1918"
THE FIRST WORLD WAR and the End of the Habsburg Monarchy, 1914 – 1918
Entnommen aus der FWF-E-Book-Library