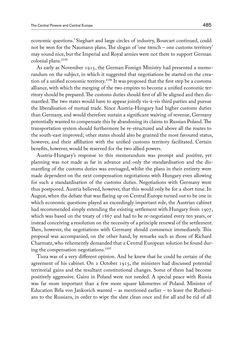 The﻿ Central﻿ Powers﻿ and﻿ Central﻿ Europe 485 economic questions.’ Sieghart and large circles of industry, Bourcart continued, could not be won for the Naumann plans. The slogan of ‘one trench  – one customs territory’ may sound nice, but the Imperial and Royal armies were not there to support German colonial plans.1155 As early as November 1915, the German Foreign Ministry had presented a memo- randum on the subject, in which it suggested that negotiations be started on the crea- tion of a unified economic territory.1156 It was proposed that the first step be a customs alliance, with which the merging of the two empires to become a unified economic ter- ritory should be prepared. The customs duties should first of all be aligned and then dis- mantled. The two states would have to appear jointly vis-à-vis third parties and pursue the liberalisation of mutual trade. Since Austria-Hungary had higher customs duties than Germany, and would therefore sustain a significant waiving of revenue, Germany potentially wanted to compensate this by abandoning its claims to Russian Poland. The transportation system should furthermore be re-structured and above all the routes to the south-east improved ; other states should also be granted the most favoured status, however, and their affiliation with the unified customs territory facilitated. Certain benefits, however, would be reserved for the two allied powers. Austria-Hungary’s response to this memorandum was prompt and positive, yet planning was not made as far in advance and only the standardisation and the dis- mantling of the customs duties was envisaged, whilst the plans in their entirety were made dependent on the next compensation negotiations with Hungary even allowing for such a standardisation of the customs duties. Negotiations with Germany were thus postponed. Austria believed, however, that this would only be for a short time. In August, when the debate that was flaring up on Central Europe turned out to be one in which economic questions played an exceedingly important role, the Austrian cabinet had recommended simply extending the existing settlement with Hungary from 1907, which was based on the treaty of 1867 and had to be re-negotiated every ten years, or instead conceiving a resolution on the necessity of a principle renewal of the settlement. Then, however, the negotiations with Germany should commence immediately. This proposal was accompanied, on the other hand, by remarks such as those of Richard Charmatz, who vehemently demanded that a Central European solution be found dur- ing the compensation negotiations.1157 Tisza was of a very different opinion. And he knew that he could be certain of the agreement of his cabinet. On 2 October 1915, the ministers had discussed potential territorial gains and the resultant constitutional changes. Some of them had become positively aggressive. Gains in Poland were not needed. A special peace with Russia was far more important than a few more square kilometres of Poland. Minister of Education Béla von Jankovich wanted  – as mentioned earlier  – to leave the Rutheni- ans to the Russians, in order to wipe the slate clean once and for all and be rid of all
zurück zum  Buch THE FIRST WORLD WAR - and the End of the Habsburg Monarchy, 1914 – 1918"
THE FIRST WORLD WAR and the End of the Habsburg Monarchy, 1914 – 1918
Entnommen aus der FWF-E-Book-Library