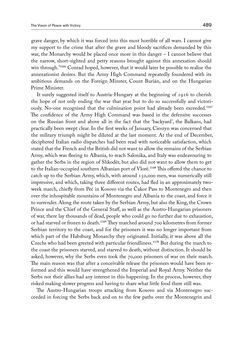 The﻿ Vision﻿ of﻿ Peace﻿ with﻿ Victory 489 grave danger, by which it was forced into this most horrible of all wars. I cannot give my support to the crime that after the grave and bloody sacrifices demanded by this war, the Monarchy would be placed once more in this danger  – I cannot believe that the narrow, short-sighted and petty reasons brought against this annexation should win through.’1166 Conrad hoped, however, that it would later be possible to realise the annexationist desires. But the Army High Command repeatedly foundered with its ambitious demands on the Foreign Minster, Count Burián, and on the Hungarian Prime Minister. It surely suggested itself to Austria-Hungary at the beginning of 1916 to cherish the hope of not only ending the war that year but to do so successfully and victori- ously. No-one recognised that the culmination point had already been exceeded.1167 The confidence of the Army High Command was based in the defensive successes on the Russian front and above all in the fact that the ‘backyard’, the Balkans, had practically been swept clear. In the first weeks of January, Cieszyn was concerned that the military triumph might be diluted at the last moment. At the end of December, deciphered Italian radio dispatches had been read with noticeable satisfaction, which stated that the French and the British did not want to allow the remains of the Serbian Army, which was fleeing to Albania, to reach Salonika, and Italy was endeavouring to gather the Serbs in the region of Shkodër, but also did not want to allow them to get to the Italian-occupied southern Albanian port of Vlorë.1168 This offered the chance to catch up to the Serbian Army, which, with around 150,000 men, was numerically still impressive, and which, taking three different routes, had fled in an approximately two- week march, chiefly from Peć in Kosovo via the Čakor Pass to Montenegro and then over the inhospitable mountains of Montenegro and Albania to the coast, and force it to surrender. Along the route taken by the Serbian Army, but also the King, the Crown Prince and the Chief of the General Staff, as well as the Austro-Hungarian prisoners of war, there lay thousands of dead, people who could go no further due to exhaustion, or had starved or frozen to death.1169 They marched around 700 kilometres from former Serbian territory to the coast, and for the prisoners it was no longer important from which part of the Habsburg Monarchy they originated. Initially, it was above all the Czechs who had been greeted with particular friendliness.1170 But during the march to the coast the prisoners starved, and starved to death, without distinction. It should be asked, however, why the Serbs even took the 70,000 prisoners of war on their march. The main reason was that after a conceivable release the prisoners would have been re- formed and this would have strengthened the Imperial and Royal Army. Neither the Serbs nor their allies had any interest in this happening. In the process, however, they risked making slower progress and having to share what little food there still was. The Austro-Hungarian troops attacking from Kosovo and via Montenegro suc- ceeded in forcing the Serbs back and on to the few paths over the Montenegrin and
zurück zum  Buch THE FIRST WORLD WAR - and the End of the Habsburg Monarchy, 1914 – 1918"
THE FIRST WORLD WAR and the End of the Habsburg Monarchy, 1914 – 1918
Entnommen aus der FWF-E-Book-Library