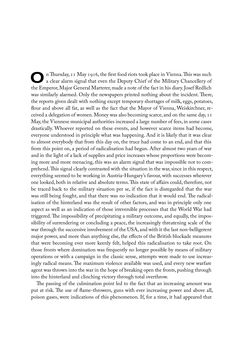 O n Thursday, 11 May 1916, the first food riots took place in Vienna. This was such a clear alarm signal that even the Deputy Chief of the Military Chancellery of the Emperor, Major General Marterer, made a note of the fact in his diary. Josef Redlich was similarly alarmed. Only the newspapers printed nothing about the incident. There, the reports given dealt with nothing except temporary shortages of milk, eggs, potatoes, flour and above all fat, as well as the fact that the Mayor of Vienna, Weiskirchner, re- ceived a delegation of women. Money was also becoming scarce, and on the same day, 11 May, the Viennese municipal authorities increased a large number of fees, in some cases drastically. Whoever reported on these events, and however scarce items had become, everyone understood in principle what was happening. And it is likely that it was clear to almost everybody that from this day on, the truce had come to an end, and that this from this point on, a period of radicalisation had begun. After almost two years of war and in the light of a lack of supplies and price increases whose proportions were becom- ing more and more menacing, this was an alarm signal that was impossible not to com- prehend. This signal clearly contrasted with the situation in the war, since in this respect, everything seemed to be working in Austria-Hungary’s favour, with successes wherever one looked, both in relative and absolute terms. This state of affairs could, therefore, not be traced back to the military situation per se, if the fact is disregarded that the war was still being fought, and that there was no indication that it would end. The radical- isation of the hinterland was the result of other factors, and was in principle only one aspect as well as an indication of those irreversible processes that the World War had triggered. The impossibility of precipitating a military outcome, and equally, the impos- sibility of surrendering or concluding a peace, the increasingly threatening scale of the war through the successive involvement of the USA, and with it the last non-belligerent major power, and more than anything else, the effects of the British blockade measures that were becoming ever more keenly felt, helped this radicalisation to take root. On those fronts where domination was frequently no longer possible by means of military operations or with a campaign in the classic sense, attempts were made to use increas- ingly radical means. The maximum violence available was used, and every new warfare agent was thrown into the war in the hope of breaking open the fronts, pushing through into the hinterland and clinching victory through total overthrow. The passing of the culmination point led to the fact that an increasing amount was put at risk. The use of flame-throwers, guns with ever increasing power and above all, poison gases, were indications of this phenomenon. If, for a time, it had appeared that
zurück zum  Buch THE FIRST WORLD WAR - and the End of the Habsburg Monarchy, 1914 – 1918"
THE FIRST WORLD WAR and the End of the Habsburg Monarchy, 1914 – 1918
Entnommen aus der FWF-E-Book-Library