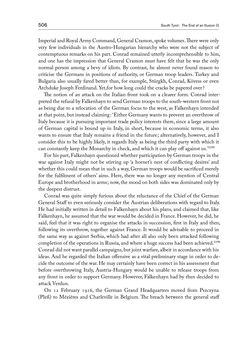 506 South Tyrol : The End of an Illusion (I) Imperial and Royal Army Command, General Cramon, spoke volumes. There were only very few individuals in the Austro-Hungarian hierarchy who were not the subject of contemptuous remarks on his part. Conrad remained utterly incomprehensible to him, and one has the impression that General Cramon must have felt that he was the only normal person among a bevy of idiots. By contrast, he almost never found reason to criticise the Germans in positions of authority, or German troop leaders. Turkey and Bulgaria also usually fared better than, for example, Stürgkh, Conrad, Kövess or even Archduke Joseph Ferdinand. Yet,for how long could the cracks be papered over ? The notion of an attack on the Italian front took on a clearer form. Conrad inter- preted the refusal by Falkenhayn to send German troops to the south-western front not as being due to a relocation of the German focus to the west, as Falkenhayn intended at that point, but instead claiming : ‘Either Germany wants to prevent an overthrow of Italy because it is pursuing important trade policy interests there, since a large amount of German capital is bound up in Italy, in short, because in economic terms, it also wants to ensure that Italy remains a friend in the future ; alternatively, however, and I consider this to be highly likely, it regards Italy as being the third party with which it can constantly keep the Monarchy in check, and which it can play off against us.’1195 For his part, Falkenhayn questioned whether participation by German troops in the war against Italy might not be stirring up ‘a hornet’s nest of conflicting desires’ and whether this could mean that in such a way, German troops would be sacrificed merely for the fulfilment of others’ aims. Here, there was no longer any mention of Central Europe and brotherhood in arms ; now, the mood on both sides was dominated only by the deepest distrust. Conrad was quite simply furious about the reluctance of the Chief of the German General Staff to even seriously consider the Austrian deliberations with regard to Italy. He had initially written in detail to Falkenhayn about his plans, and claimed that, like Falkenhayn, he assumed that the war would be decided in France. However, he did, he said, feel that it was right to organise the attacks in succession, first in Italy and then, following its overthrow, together against France. It would be advisable to proceed in the same way as against Serbia, which had after all also only been attacked following completion of the operations in Russia, and where a huge success had been achieved.1196 Conrad did not want parallel campaigns, but joint warfare, albeit in accordance with his ideas. And he regarded the Italian offensive as a vital preliminary stage in order to de- cide the outcome of the war. He may certainly have been correct in his assessment that before overthrowing Italy, Austria-Hungary would be unable to release troops from any front in order to support Germany. However, Falkenhayn had by then decided to attack Verdun. On 12 February 1916, the German Grand Headquarters moved from Pszczyna (Pleß) to Mézières and Charleville in Belgium. The breach between the general staff
zurück zum  Buch THE FIRST WORLD WAR - and the End of the Habsburg Monarchy, 1914 – 1918"
THE FIRST WORLD WAR and the End of the Habsburg Monarchy, 1914 – 1918
Entnommen aus der FWF-E-Book-Library