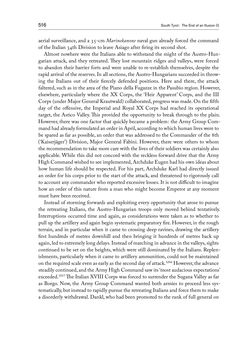 516 South Tyrol : The End of an Illusion (I) aerial surveillance, and a 35-cm Marinekanone naval gun already forced the command of the Italian 34th Division to leave Asiago after firing its second shot. Almost nowhere were the Italians able to withstand the might of the Austro-Hun- garian attack, and they retreated. They lost mountain ridges and valleys, were forced to abandon their barrier forts and were unable to re-establish themselves, despite the rapid arrival of the reserves. In all sections, the Austro-Hungarians succeeded in throw- ing the Italians out of their fiercely defended positions. Here and there, the attack faltered, such as in the area of the Piano della Fugazze in the Pasubio region. However, elsewhere, particularly where the XX Corps, the ‘Heir Apparent’ Corps, and the III Corps (under Major General Krautwald) collaborated, progress was made. On the fifth day of the offensive, the Imperial and Royal XX Corps had reached its operational target, the Astico Valley. This provided the opportunity to break through to the plain. However, there was one factor that quickly became a problem : the Army Group Com- mand had already formulated an order in April, according to which human lives were to be spared as far as possible, an order that was addressed to the Commander of the 8th (‘Kaiserjäger’) Division, Major General Fabini. However, there were others to whom the recommendation to take more care with the lives of their soldiers was certainly also applicable. While this did not concord with the reckless forward drive that the Army High Command wished to see implemented, Archduke Eugen had his own ideas about how human life should be respected. For his part, Archduke Karl had directly issued an order for his corps prior to the start of the attack, and threatened to rigorously call to account any commander who reported excessive losses. It is not difficult to imagine how an order of this nature from a man who might become Emperor at any moment must have been received. Instead of storming forwards and exploiting every opportunity that arose to pursue the retreating Italians, the Austro-Hungarian troops only moved behind tentatively. Interruptions occurred time and again, as considerations were taken as to whether to pull up the artillery and again begin systematic preparatory fire. However, in the rough terrain, and in particular when it came to crossing deep ravines, drawing the artillery first hundreds of metres downhill and then bringing it hundreds of metres back up again, led to extremely long delays. Instead of marching in advance in the valleys, sights continued to be set on the heights, which were still dominated by the Italians. Replen- ishments, particularly when it came to artillery ammunition, could not be maintained on the required scale even as early as the second day of attack.1216 However, the advance steadily continued, and the Army High Command saw its ‘most audacious expectations’ exceeded.1217 The Italian XVIII Corps was forced to surrender the Sugana Valley as far as Borgo. Now, the Army Group Command wanted both armies to proceed less sys- tematically, but instead to rapidly pursue the retreating Italians and force them to make a disorderly withdrawal. Dankl, who had been promoted to the rank of full general on
zurück zum  Buch THE FIRST WORLD WAR - and the End of the Habsburg Monarchy, 1914 – 1918"
THE FIRST WORLD WAR and the End of the Habsburg Monarchy, 1914 – 1918
Entnommen aus der FWF-E-Book-Library