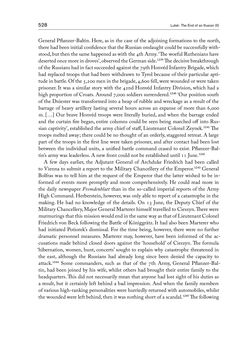 528 Lutsk : The End of an Illusion (II) General Pflanzer-Baltin. Here, as in the case of the adjoining formations to the north, there had been initial confidence that the Russian onslaught could be successfully with- stood, but then the same happened as with the 4th Army. ‘The woeful Ruthenians have deserted once more in droves’, observed the German side.1239 The decisive breakthrough of the Russians had in fact succeeded against the 79th Honvéd Infantry Brigade, which had replaced troops that had been withdrawn to Tyrol because of their particular apti- tude in battle. Of the 5,200 men in the brigade, 4,600 fell, were wounded or were taken prisoner. It was a similar story with the 42nd Honvéd Infantry Division, which had a high proportion of Croats. Around 7,000 soldiers surrendered.1240 ‘Our position south of the Dniester was transformed into a heap of rubble and wreckage as a result of the barrage of heavy artillery lasting several hours across an expanse of more than 6,000 m. […] Our brave Honvéd troops were literally buried, and when the barrage ended and the curtain fire began, entire columns could be seen being marched off into Rus- sian captivity’, established the army chief of staff, Lieutenant Colonel Zeynek.1241 The troops melted away ; there could be no thought of an orderly, staggered retreat. A large part of the troops in the first line were taken prisoner, and after contact had been lost between the individual units, a unified battle command ceased to exist. Pflanzer-Bal- tin’s army was leaderless. A new front could not be established until 11 June.1242 A few days earlier, the Adjutant General of Archduke Friedrich had been called to Vienna to submit a report to the Military Chancellery of the Emperor.1243 General Bolfras was to tell him at the request of the Emperor that the latter wished to be in- formed of events more promptly and more comprehensively. He could read more in the daily newspaper Fremdenblatt than in the so-called imperial reports of the Army High Command. Herberstein, however, was only able to report of a catastrophe in the making. He had no knowledge of the details. On 13 June, the Deputy Chief of the Military Chancellery, Major General Marterer himself travelled to Cieszyn. There were murmurings that this mission would end in the same way as that of Lieutenant Colonel Friedrich von Beck following the Battle of Königgrätz. It had also been Marterer who had initiated Potiorek’s dismissal. For the time being, however, there were no further dramatic personnel measures. Marterer may, however, have been informed of the ac- cusations made behind closed doors against the ‘household’ of Cieszyn. The formula ‘hibernation, women, hunt, concerts’ sought to explain why catastrophe threatened in the east, although the Russians had already long since been denied the capacity to attack.1244 Some commanders, such as that of the 7th Army, General Pflanzer-Bal- tin, had been joined by his wife, whilst others had brought their entire family to the headquarters. This did not necessarily mean that anyone had lost sight of his duties as a result, but it certainly left behind a bad impression. And when the family members of various high-ranking personalities were hurriedly returned with automobiles, whilst the wounded were left behind, then it was nothing short of a scandal.1245 The following
zurück zum  Buch THE FIRST WORLD WAR - and the End of the Habsburg Monarchy, 1914 – 1918"
THE FIRST WORLD WAR and the End of the Habsburg Monarchy, 1914 – 1918
Entnommen aus der FWF-E-Book-Library