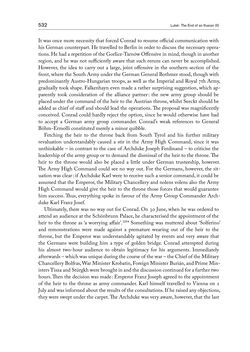 532 Lutsk : The End of an Illusion (II) It was once more necessity that forced Conrad to resume official communication with his German counterpart. He travelled to Berlin in order to discuss the necessary opera- tions. He had a repetition of the Gorlice-Tarnów Offensive in mind, though in another region, and he was not sufficiently aware that such reruns can never be accomplished. However, the idea to carry out a large, joint offensive in the southern section of the front, where the South Army under the German General Bothmer stood, though with predominantly Austro-Hungarian troops, as well as the Imperial and Royal 7th Army, gradually took shape. Falkenhayn even made a rather surprising suggestion, which ap- parently took consideration of the alliance partner : the new army group should be placed under the command of the heir to the Austrian throne, whilst Seeckt should be added as chief of staff and should lead the operations. The proposal was magnificently conceived. Conrad could hardly reject the option, since he would otherwise have had to accept a German army group commander. Conrad’s weak references to General Böhm-Ermolli constituted merely a minor quibble. Fetching the heir to the throne back from South Tyrol and his further military revaluation understandably caused a stir in the Army High Command, since it was unthinkable  – in contrast to the case of Archduke Joseph Ferdinand  – to criticise the leadership of the army group or to demand the dismissal of the heir to the throne. The heir to the throne would also be placed a little under German trusteeship, however. The Army High Command could see no way out. For the Germans, however, the sit- uation was clear : if Archduke Karl were to receive such a senior command, it could be assumed that the Emperor, the Military Chancellery and nolens volens also the Army High Command would give the heir to the throne those forces that would guarantee him success. Thus, everything spoke in favour of the Army Group Commander Arch- duke Karl Franz Josef. Ultimately, there was no way out for Conrad. On 30 June, when he was ordered to attend an audience at the Schönbrunn Palace, he characterised the appointment of the heir to the throne as ‘a worrying affair’.1254 Something was muttered about ‘Solferino’ and remonstrations were made against a premature wearing out of the heir to the throne, but the Emperor was understandably agitated by events and very aware that the Germans were building him a type of golden bridge. Conrad attempted during his almost two-hour audience to obtain legitimacy for his arguments. Immediately afterwards  – which was unique during the course of the war  – the Chief of the Military Chancellery Bolfras, War Minister Krobatin, Foreign Minister Burián, and Prime Min- isters Tisza and Stürgkh were brought in and the discussion continued for a further two hours. Then the decision was made : Emperor Franz Joseph agreed to the appointment of the heir to the throne as army commander. Karl himself travelled to Vienna on 2 July and was informed about the results of the consultations. If he raised any objections, they were swept under the carpet. The Archduke was very aware, however, that the last
zurück zum  Buch THE FIRST WORLD WAR - and the End of the Habsburg Monarchy, 1914 – 1918"
THE FIRST WORLD WAR and the End of the Habsburg Monarchy, 1914 – 1918
Entnommen aus der FWF-E-Book-Library