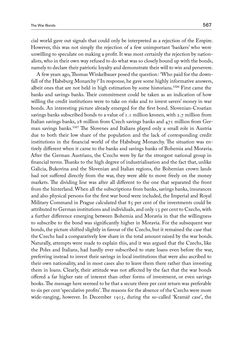 The﻿ War﻿ Bonds 567 cial world gave out signals that could only be interpreted as a rejection of the Empire. However, this was not simply the rejection of a few unimportant ‘bankers’ who were unwilling to speculate on making a profit. It was most certainly the rejection by nation- alists, who in their own way refused to do what was so closely bound up with the bonds, namely to declare their patriotic loyalty and demonstrate their will to win and persevere. A few years ago, Thomas Winkelbauer posed the question : ‘Who paid for the down- fall of the Habsburg Monarchy ?’ In response, he gave some highly informative answers, albeit ones that are not held in high estimation by some historians.1326 First came the banks and savings banks. Their commitment could be taken as an indication of how willing the credit institutions were to take on risks and to invest savers’ money in war bonds. An interesting picture already emerged for the first bond. Slovenian-Croatian savings banks subscribed bonds to a value of 1.1 million kronen, with 2.7 million from Italian savings banks, 28 million from Czech savings banks and 471 million from Ger- man savings banks.1327 The Slovenes and Italians played only a small role in Austria due to both their low share of the population and the lack of corresponding credit institutions in the financial world of the Habsburg Monarchy. The situation was en- tirely different when it came to the banks and savings banks of Bohemia and Moravia. After the German Austrians, the Czechs were by far the strongest national group in financial terms. Thanks to the high degree of industrialisation and the fact that, unlike Galicia, Bukovina and the Slovenian and Italian regions, the Bohemian crown lands had not suffered directly from the war, they were able to move freely on the money markets. The dividing line was after all different to the one that separated the front from the hinterland. When all the subscriptions from banks, savings banks, insurances and also physical persons for the first war bond were included, the Imperial and Royal Military Command in Prague calculated that 85 per cent of the investments could be attributed to German institutions and individuals, and only 15 per cent to Czechs, with a further difference emerging between Bohemia and Moravia in that the willingness to subscribe to the bond was significantly higher in Moravia. For the subsequent war bonds, the picture shifted slightly in favour of the Czechs, but it remained the case that the Czechs had a comparatively low share in the total amount raised by the war bonds. Naturally, attempts were made to explain this, and it was argued that the Czechs, like the Poles and Italians, had hardly ever subscribed to state loans even before the war, preferring instead to invest their savings in local institutions that were also ascribed to their own nationality, and in most cases also to leave them there rather than investing them in loans. Clearly, their attitude was not affected by the fact that the war bonds offered a far higher rate of interest than other forms of investment, or even savings books. The message here seemed to be that a secure three per cent return was preferable to six per cent ‘speculative profits’. The reasons for the absence of the Czechs were more wide-ranging, however. In December 1915, during the so-called ‘Kramář case’, the
zurück zum  Buch THE FIRST WORLD WAR - and the End of the Habsburg Monarchy, 1914 – 1918"
THE FIRST WORLD WAR and the End of the Habsburg Monarchy, 1914 – 1918
Entnommen aus der FWF-E-Book-Library