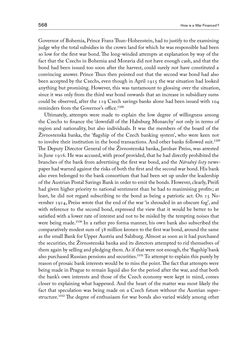 568 How is a War Financed ? Governor of Bohemia, Prince Franz Thun-Hohenstein, had to justify to the examining judge why the total subsidies in the crown land for which he was responsible had been so low for the first war bond. The long-winded attempts at explanation by way of the fact that the Czechs in Bohemia and Moravia did not have enough cash, and that the bond had been issued too soon after the harvest, could surely not have constituted a convincing answer. Prince Thun then pointed out that the second war bond had also been accepted by the Czechs, even though in April 1915 the war situation had looked anything but promising. However, this was tantamount to glossing over the situation, since it was only from the third war bond onwards that an increase in subsidiary sums could be observed, after the 119 Czech savings banks alone had been issued with 104 reminders from the Governor’s office.1328 Ultimately, attempts were made to explain the low degree of willingness among the Czechs to finance the ‘downfall of the Habsburg Monarchy’ not only in terms of region and nationality, but also individuals. It was the members of the board of the Živnostenská banka, the ‘flagship of the Czech banking system’, who were keen not to involve their institution in the bond transactions. And other banks followed suit.1329 The Deputy Director General of the Živnostenská banka, Jarolsav Preiss, was arrested in June 1916. He was accused, with proof provided, that he had directly prohibited the branches of the bank from advertising the first war bond, and the Národný listy news- paper had warned against the risks of both the first and the second war bond. His bank also even belonged to the bank consortium that had been set up under the leadership of the Austrian Postal Savings Bank in order to emit the bonds. However, clearly, Preiß had given higher priority to national sentiment than he had to maximising profits ; at least, he did not regard subscribing to the bond as being a patriotic act. On 15 No- vember 1914, Preiss wrote that the end of the war ‘is shrouded in an obscure fog’, and with reference to the second bond, expressed the view that it would be better to be satisfied with a lower rate of interest and not to be misled by the tempting noises that were being made.1330 In a rather pro forma manner, his own bank also subscribed the comparatively modest sum of 38 million kronen to the first war bond, around the same as the small Bank for Upper Austria and Salzburg. Almost as soon as it had purchased the securities, the Živnostenská banka and its directors attempted to rid themselves of them again by selling and pledging them. As if that were not enough, the ‘flagship’ bank also purchased Russian pensions and securities.1331 To attempt to explain this purely by reason of prosaic bank interests would be to miss the point. The fact that attempts were being made in Prague to remain liquid also for the period after the war, and that both the bank’s own interests and those of the Czech economy were kept in mind, comes closer to explaining what happened. And the heart of the matter was most likely the fact that speculation was being made on a Czech future without the Austrian super- structure.1332 The degree of enthusiasm for war bonds also varied widely among other
zurück zum  Buch THE FIRST WORLD WAR - and the End of the Habsburg Monarchy, 1914 – 1918"
THE FIRST WORLD WAR and the End of the Habsburg Monarchy, 1914 – 1918
Entnommen aus der FWF-E-Book-Library