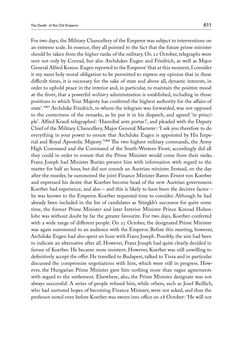 The Death of the Old Emperor 611 For two days, the Military Chancellery of the Emperor was subject to interventions on an extreme scale. In essence, they all pointed to the fact that the future prime minister should be taken from the higher ranks of the military. On 22 October, telegraphs were sent not only by Conrad, but also Archdukes Eugen and Friedrich, as well as Major General Alfred Krauss. Eugen reported to the Emperor ‘that at this moment, I consider it my most holy moral obligation to be permitted to express my opinion that in these difficult times, it is necessary for the sake of state and above all, dynastic interests, in order to uphold peace in the interior and, in particular, to maintain the positive mood at the front, that a powerful military administration is established, including in those positions to which Your Majesty has conferred the highest authority for the affairs of state’.1407 Archduke Friedrich, to whom the telegram was forwarded, was not opposed to the correctness of the remarks, as he put it in his dispatch, and agreed ‘in princi- ple’. Alfred Krauß telegraphed : ‘Hannibal ante portas !’, and pleaded with the Deputy Chief of the Military Chancellery, Major General Marterer : ‘I ask you therefore to do everything in your power to ensure that Archduke Eugen is appointed by His Impe- rial and Royal Apostolic Majesty.’1408 The two highest military commands, the Army High Command and the Command of the South-Western Front, accordingly did all they could in order to ensure that the Prime Minister would come from their ranks. Franz Joseph had Minister Burián present him with information with regard to the matter for half an hour, but did not consult an Austrian minister. Instead, on the day after the murder, he summoned the joint Finance Minister Baron Ernest von Koerber and expressed his desire that Koerber become head of the new Austrian government. Koerber had experience, and also  – and this is likely to have been the decisive factor  – he was known to the Emperor. Koerber requested time to consider. Although he had already been included in the list of candidates as Stürgkh’s successor for quite some time, the former Prime Minister and later Interior Minister Prince Konrad Hohen- lohe was without doubt by far the greater favourite. For two days, Koerber conferred with a wide range of different people. On 25 October, the designated Prime Minister was again summoned to an audience with the Emperor. Before this meeting, however, Archduke Eugen had also spent an hour with Franz Joseph. Possibly, the aim had been to indicate an alternative after all. However, Franz Joseph had quite clearly decided in favour of Koerber. He became more insistent. However, Koerber was still unwilling to definitively accept the offer. He travelled to Budapest, talked to Tisza and in particular discussed the compromise negotiations with him, which were still in progress. How- ever, the Hungarian Prime Minister gave him nothing more than vague agreements with regard to the settlement. Elsewhere, also, the Prime Minister designate was not always successful. A series of people refused him, while others, such as Josef Redlich, who had nurtured hopes of becoming Finance Minister, were not asked, and thus the professor noted even before Koerber was sworn into office on 28 October : ‘He will not
zurück zum  Buch THE FIRST WORLD WAR - and the End of the Habsburg Monarchy, 1914 – 1918"
THE FIRST WORLD WAR and the End of the Habsburg Monarchy, 1914 – 1918
Entnommen aus der FWF-E-Book-Library