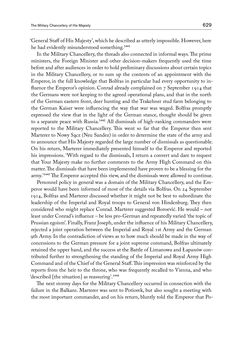 The﻿ Military﻿ Chancellery﻿ of﻿ His﻿ Majesty 629 ‘General Staff of His Majesty’, which he described as utterly impossible. However, here he had evidently misunderstood something.1441 In the Military Chancellery, the threads also connected in informal ways. The prime ministers, the Foreign Minister and other decision-makers frequently used the time before and after audiences in order to hold preliminary discussions about certain topics in the Military Chancellery, or to sum up the contents of an appointment with the Emperor, in the full knowledge that Bolfras in particular had every opportunity to in- fluence the Emperor’s opinion. Conrad already complained on 7 September 1914 that the Germans were not keeping to the agreed operational plans, and that in the north of the German eastern front, deer hunting and the Trakehner stud farm belonging to the German Kaiser were influencing the way that war was waged. Bolfras promptly expressed the view that in the light of the German stance, thought should be given to a separate peace with Russia.1442 All dismissals of high-ranking commanders were reported to the Military Chancellery. This went so far that the Emperor then sent Marterer to Nowy Sącz (Neu Sandez) in order to determine the state of the army and to announce that His Majesty regarded the large number of dismissals as questionable. On his return, Marterer immediately presented himself to the Emperor and reported his impressions. ‘With regard to the dismissals, I return a convert and dare to request that Your Majesty make no further comments to the Army High Command on this matter. The dismissals that have been implemented have proven to be a blessing for the army.’1443 The Emperor accepted this view, and the dismissals were allowed to continue. Personnel policy in general was a domain of the Military Chancellery, and the Em- peror would have been informed of most of the details via Bolfras. On 24 September 1914, Bolfras and Marterer discussed whether it might not be best to subordinate the leadership of the Imperial and Royal troops to General von Hindenburg. They then considered who might replace Conrad. Marterer suggested Boroević. He would  – not least under Conrad’s influence  – be less pro-German and repeatedly varied ‘the topic of Prussian egoism’. Finally, Franz Joseph, under the influence of his Military Chancellery, rejected a joint operation between the Imperial and Royal 1st Army and the German 9th Army. In the contradiction of views as to how much should be made in the way of concessions to the German pressure for a joint supreme command, Bolfras ultimately retained the upper hand, and the success at the Battle of Limanowa and Łapanów con- tributed further to strengthening the standing of the Imperial and Royal Army High Command and of the Chief of the General Staff. This impression was reinforced by the reports from the heir to the throne, who was frequently recalled to Vienna, and who ‘described [the situation] as reassuring’.1444 The next stormy days for the Military Chancellery occurred in connection with the failure in the Balkans. Marterer was sent to Potiorek, but also sought a meeting with the most important commander, and on his return, bluntly told the Emperor that Po-
zurück zum  Buch THE FIRST WORLD WAR - and the End of the Habsburg Monarchy, 1914 – 1918"
THE FIRST WORLD WAR and the End of the Habsburg Monarchy, 1914 – 1918
Entnommen aus der FWF-E-Book-Library