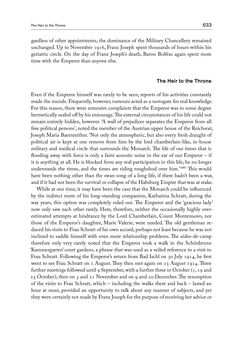 The﻿ Heir﻿ to﻿ the﻿ Throne 633 gardless of other appointments, the dominance of the Military Chancellery remained unchanged. Up to November 1916, Franz Joseph spent thousands of hours within his geriatric circle. On the day of Franz Joseph’s death, Baron Bolfras again spent more time with the Emperor than anyone else. The Heir to the Throne Even if the Emperor himself was rarely to be seen, reports of his activities constantly made the rounds. Frequently, however, rumours acted as a surrogate for real knowledge. For this reason, there were extensive complaints that the Emperor was to some degree hermetically sealed off by his entourage. The external circumstances of his life could not remain entirely hidden, however. ‘A wall of prejudices separates the Emperor from all free political persons’, noted the member of the Austrian upper house of the Reichsrat, Joseph Maria Baernreither. ‘Not only the atmospheric, but also every fresh draught of political air is kept at one remove from him by the lord chamberlain-like, in-house military and medical circle that surrounds the Monarch. The life of our times that is flooding away with force is only a faint acoustic noise in the ear of our Emperor  – if it is anything at all. He is blocked from any real participation in this life, he no longer understands the times, and the times are riding roughshod over him.’1451 This would have been nothing other than the swan song of a long life, if there hadn’t been a war, and if it had not been the survival or collapse of the Habsburg Empire that was at stake. While at one time, it may have been the case that the Monarch could be influenced by the indirect route of his long-standing companion, Katharina Schratt, during the war years, this option was completely ruled out. The Emperor and the ‘gracious lady’ now only saw each other rarely. Here, therefore, neither the occasionally highly over- estimated attempts at hindrance by the Lord Chamberlain, Count Montenuovo, nor those of the Emperor’s daughter, Marie Valerie, were needed. The old gentleman re- duced his visits to Frau Schratt of his own accord, perhaps not least because he was not inclined to saddle himself with even more relationship problems. The aides-de-camp therefore only very rarely noted that the Emperor took a walk in the Schönbrunn ‘Kammergarten’ court gardens, a phrase that was used as a veiled reference to a visit to Frau Schratt. Following the Emperor’s return from Bad Ischl on 30 July 1914, he first went to see Frau Schratt on 1 August. They then met again on 23 August 1914. Three further meetings followed until 9 September, with a further three in October (1, 19 and 23 October), then on 3 and 21 November and on 9 and 20 December. The resumption of the visits to Frau Schratt, which  – including the walks there and back  – lasted an hour at most, provided an opportunity to talk about any manner of subjects, and yet they were certainly not made by Franz Joseph for the purpose of receiving her advice or
zurück zum  Buch THE FIRST WORLD WAR - and the End of the Habsburg Monarchy, 1914 – 1918"
THE FIRST WORLD WAR and the End of the Habsburg Monarchy, 1914 – 1918
Entnommen aus der FWF-E-Book-Library