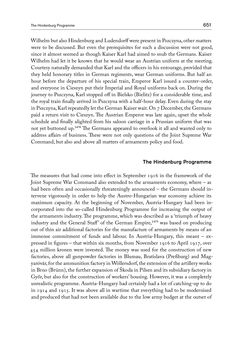 The﻿ Hindenburg﻿ Programme 651 Wilhelm but also Hindenburg and Ludendorff were present in Pszczyna, other matters were to be discussed. But even the prerequisites for such a discussion were not good, since it almost seemed as though Kaiser Karl had aimed to snub the Germans. Kaiser Wilhelm had let it be known that he would wear an Austrian uniform at the meeting. Courtesy naturally demanded that Karl and the officers in his entourage, provided that they held honorary titles in German regiments, wear German uniforms. But half an hour before the departure of his special train, Emperor Karl issued a counter-order, and everyone in Cieszyn put their Imperial and Royal uniforms back on. During the journey to Pszczyna, Karl stopped off in Bielsko (Bielitz) for a considerable time, and the royal train finally arrived in Pszczyna with a half-hour delay. Even during the stay in Pszczyna, Karl repeatedly let the German Kaiser wait. On 7 December, the Germans paid a return visit to Cieszyn. The Austrian Emperor was late again, upset the whole schedule and finally alighted from his saloon carriage in a Prussian uniform that was not yet buttoned up.1478 The Germans appeared to overlook it all and wanted only to address affairs of business. These were not only questions of the Joint Supreme War Command, but also and above all matters of armaments policy and food. The Hindenburg Programme The measures that had come into effect in September 1916 in the framework of the Joint Supreme War Command also extended to the armaments economy, where  – as had been often and occasionally threateningly announced  – the Germans should in- tervene vigorously in order to help the Austro-Hungarian war economy achieve its maximum capacity. At the beginning of November, Austria-Hungary had been in- corporated into the so-called Hindenburg Programme for increasing the output of the armaments industry. The programme, which was described as a ‘triumph of heavy industry and the General Staff’ of the German Empire,1479 was based on producing out of thin air additional factories for the manufacture of armaments by means of an immense commitment of funds and labour. In Austria-Hungary, this meant  – ex- pressed in figures  – that within six months, from November 1916 to April 1917, over 454 million kronen were invested. The money was used for the construction of new factories, above all gunpowder factories in Blumau, Bratislava (Preßburg) and Mag- yaróvár, for the ammunition factory in Wöllersdorf, the extension of the artillery works in Brno (Brünn), the further expansion of Škoda in Pilsen and its subsidiary factory in Győr, but also for the construction of workers’ housing. However, it was a completely unrealistic programme. Austria-Hungary had certainly had a lot of catching-up to do in 1914 and 1915. It was above all in wartime that everything had to be modernised and produced that had not been available due to the low army budget at the outset of
zurück zum  Buch THE FIRST WORLD WAR - and the End of the Habsburg Monarchy, 1914 – 1918"
THE FIRST WORLD WAR and the End of the Habsburg Monarchy, 1914 – 1918
Entnommen aus der FWF-E-Book-Library