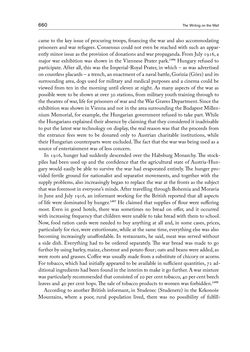 660 The Writing on the Wall came to the key issue of procuring troops, financing the war and also accommodating prisoners and war refugees. Consensus could not even be reached with such an appar- ently minor issue as the provision of donations and war propaganda. From July 1916, a major war exhibition was shown in the Viennese Prater park.1496 Hungary refused to participate. After all, this was the Imperial-Royal Prater, in which  – as was advertised on countless placards  – a trench, an enactment of a naval battle, Gorizia (Görz) and its surrounding area, dogs used for military and medical purposes and a cinema could be viewed from ten in the morning until eleven at night. As many aspects of the war as possible were to be shown at over 30 stations, from military youth training through to the theatres of war, life for prisoners of war and the War Graves Department. Since the exhibition was shown in Vienna and not in the area surrounding the Budapest Millen- nium Memorial, for example, the Hungarian government refused to take part. While the Hungarians explained their absence by claiming that they considered it inadvisable to put the latest war technology on display, the real reason was that the proceeds from the entrance fees were to be donated only to Austrian charitable institutions, while their Hungarian counterparts were excluded. The fact that the war was being used as a source of entertainment was of less concern. In 1916, hunger had suddenly descended over the Habsburg Monarchy. The stock- piles had been used up and the confidence that the agricultural state of Austria-Hun- gary would easily be able to survive the war had evaporated entirely. The hunger pro- vided fertile ground for nationalist and separatist movements, and together with the supply problems, also increasingly began to replace the war at the fronts as the subject that was foremost in everyone’s minds. After travelling through Bohemia and Moravia in June and July 1916, an informant working for the British reported that all aspects of life were dominated by hunger.1497 He claimed that supplies of flour were suffering most. Even in good hotels, there was sometimes no bread on offer, and it occurred with increasing frequency that children were unable to take bread with them to school. Now, food ration cards were needed to buy anything at all and, in some cases, prices, particularly for rice, were extortionate, while at the same time, everything else was also becoming increasingly unaffordable. In restaurants, he said, meat was served without a side dish. Everything had to be ordered separately. The war bread was made to go further by using barley, maize, chestnut and potato flour ; oats and beans were added, as were roots and grasses. Coffee was usually made from a substitute of chicory or acorns. For tobacco, which had initially appeared to be available in sufficient quantities, 72 ad- ditional ingredients had been found in the interim to make it go further. A war mixture was particularly recommended that consisted of 20 per cent tobacco, 40 per cent beech leaves and 40 per cent hops. The sale of tobacco products to women was forbidden.1498 According to another British informant, in Studenec (Studenetz) in the Krkonoše Mountains, where a poor, rural population lived, there was no possibility of fulfill-
zurück zum  Buch THE FIRST WORLD WAR - and the End of the Habsburg Monarchy, 1914 – 1918"
THE FIRST WORLD WAR and the End of the Habsburg Monarchy, 1914 – 1918
Entnommen aus der FWF-E-Book-Library