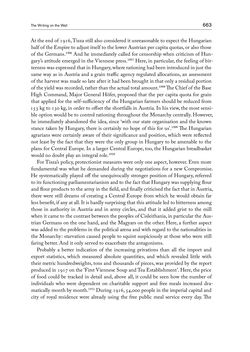 The Writing on the Wall 663 At the end of 1916, Tisza still also considered it unreasonable to expect the Hungarian half of the Empire to adjust itself to the lower Austrian per capita quotas, or also those of the Germans.1506 And he immediately called for censorship when criticism of Hun- gary’s attitude emerged in the Viennese press.1507 Here, in particular, the feeling of bit- terness was expressed that in Hungary, where rationing had been introduced in just the same way as in Austria and a grain traffic agency regulated allocations, an assessment of the harvest was made so late after it had been brought in that only a residual portion of the yield was recorded, rather than the actual total amount.1508 The Chief of the Base High Command, Major General Höfer, proposed that the per capita quota for grain that applied for the self-sufficiency of the Hungarian farmers should be reduced from 153 kg to 130 kg, in order to offset the shortfalls in Austria. In his view, the most sensi- ble option would be to control rationing throughout the Monarchy centrally. However, he immediately abandoned the idea, since ‘with our state organisation and the known stance taken by Hungary, there is certainly no hope of this for us’.1509 The Hungarian agrarians were certainly aware of their significance and position, which were reflected not least by the fact that they were the only group in Hungary to be amenable to the plans for Central Europe. In a larger Central Europe, too, the Hungarian breadbasket would no doubt play an integral role.1510 For Tisza’s policy, protectionist measures were only one aspect, however. Even more fundamental was what he demanded during the negotiations for a new Compromise. He systematically played off the unequivocally stronger position of Hungary, referred to its functioning parliamentarianism and to the fact that Hungary was supplying flour and flour products to the army in the field, and finally criticised the fact that in Austria, there were still dreams of creating a Central Europe from which he would obtain far less benefit, if any at all. It is hardly surprising that this attitude led to bitterness among those in authority in Austria and in army circles, and that it added grist to the mill when it came to the contrast between the peoples of Cisleithania, in particular the Aus- trian Germans on the one hand, and the Magyars on the other. Here, a further aspect was added to the problems in the political arena and with regard to the nationalities in the Monarchy : starvation caused people to squint suspiciously at those who were still faring better. And it only served to exacerbate the antagonisms. Probably a better indication of the increasing privations than all the import and export statistics, which measured absolute quantities, and which revealed little with their metric hundredweights, tons and thousands of pieces, was provided by the report produced in 1917 on the ‘First Viennese Soup and Tea Establishment’. Here, the price of food could be tracked in detail and, above all, it could be seen how the number of individuals who were dependent on charitable support and free meals increased dra- matically month by month.1511 During 1916, 54,000 people in the imperial capital and city of royal residence were already using the free public meal service every day. The
zurück zum  Buch THE FIRST WORLD WAR - and the End of the Habsburg Monarchy, 1914 – 1918"
THE FIRST WORLD WAR and the End of the Habsburg Monarchy, 1914 – 1918
Entnommen aus der FWF-E-Book-Library