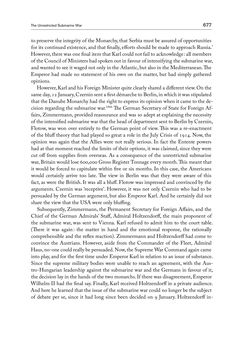 The﻿ Unrestricted﻿ Submarine﻿ War 677 to preserve the integrity of the Monarchy, that Serbia must be assured of opportunities for its continued existence, and that finally, efforts should be made to approach Russia.’ However, there was one final item that Karl could not fail to acknowledge : all members of the Council of Ministers had spoken out in favour of intensifying the submarine war, and wanted to see it waged not only in the Atlantic, but also in the Mediterranean. The Emperor had made no statement of his own on the matter, but had simply gathered opinions. However, Karl and his Foreign Minister quite clearly shared a different view. On the same day, 12 January, Czernin sent a first démarche to Berlin, in which it was stipulated that the Danube Monarchy had the right to express its opinion when it came to the de- cision regarding the submarine war.1541 The German Secretary of State for Foreign Af- fairs, Zimmermann, provided reassurance and was so adept at explaining the necessity of the intensified submarine war that the head of department sent to Berlin by Czernin, Flotow, was won over entirely to the German point of view. This was a re-enactment of the bluff theory that had played so great a role in the July Crisis of 1914. Now, the opinion was again that the Allies were not really serious. In fact the Entente powers had at that moment reached the limits of their options, it was claimed, since they were cut off from supplies from overseas. As a consequence of the unrestricted submarine war, Britain would lose 600,000 Gross Register Tonnage every month. This meant that it would be forced to capitulate within five or six months. In this case, the Americans would certainly arrive too late. The view in Berlin was that they were aware of this fact, as were the British. It was all a bluff. Flotow was impressed and convinced by the arguments. Czernin was ‘receptive’. However, it was not only Czernin who had to be persuaded by the German argument, but also Emperor Karl. And he certainly did not share the view that the USA were only bluffing. Subsequently, Zimmermann, the Permanent Secretary for Foreign Affairs, and the Chief of the German Admirals’ Staff, Admiral Holtzendorff, the main proponent of the submarine war, was sent to Vienna. Karl refused to admit him to the court table. (There it was again : the matter in hand and the emotional response, the rationally comprehensible and the reflex reaction). Zimmermann and Holtzendorff had come to convince the Austrians. However, aside from the Commander of the Fleet, Admiral Haus, no-one could really be persuaded. Now, the Supreme War Command again came into play, and for the first time under Emperor Karl in relation to an issue of substance. Since the supreme military bodies were unable to reach an agreement, with the Aus- tro-Hungarian leadership against the submarine war and the Germans in favour of it, the decision lay in the hands of the two monarchs. If there was disagreement, Emperor Wilhelm II had the final say. Finally, Karl received Holtzendorff in a private audience. And here he learned that the issue of the submarine war could no longer be the subject of debate per se, since it had long since been decided on 9 January. Holtzendorff in-
zurück zum  Buch THE FIRST WORLD WAR - and the End of the Habsburg Monarchy, 1914 – 1918"
THE FIRST WORLD WAR and the End of the Habsburg Monarchy, 1914 – 1918
Entnommen aus der FWF-E-Book-Library