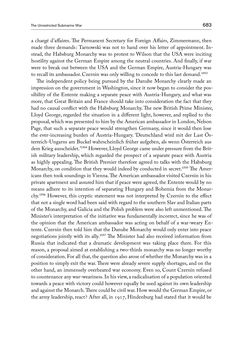 The﻿ Unrestricted﻿ Submarine﻿ War 683 a chargé d’affaires. The Permanent Secretary for Foreign Affairs, Zimmermann, then made three demands : Tarnowski was not to hand over his letter of appointment. In- stead, the Habsburg Monarchy was to protest to Wilson that the USA were inciting hostility against the German Empire among the neutral countries. And finally, if war were to break out between the USA and the German Empire, Austria-Hungary was to recall its ambassador. Czernin was only willing to concede to this last demand.1553 The independent policy being pursued by the Danube Monarchy clearly made an impression on the government in Washington, since it now began to consider the pos- sibility of the Entente making a separate peace with Austria-Hungary, and what was more, that Great Britain and France should take into consideration the fact that they had no causal conflict with the Habsburg Monarchy. The new British Prime Minister, Lloyd George, regarded the situation in a different light, however, and replied to the proposal, which was presented to him by the American ambassador in London, Nelson Page, that such a separate peace would strengthen Germany, since it would then lose the ever-increasing burden of Austria-Hungary. ‘Deutschland wird mit der Last Ös- terreich-Ungarns am Buckel wahrscheinlich früher aufgeben, als wenn Österreich aus dem Krieg ausscheidet.’1554 However, Lloyd George came under pressure from the Brit- ish military leadership, which regarded the prospect of a separate peace with Austria as highly appealing. The British Premier therefore agreed to talks with the Habsburg Monarchy, on condition that they would indeed by conducted in secret.1555 The Amer- icans then took soundings in Vienna. The American ambassador visited Czernin in his private apartment and assured him that if peace were agreed, the Entente would by no means adhere to its intention of separating Hungary and Bohemia from the Monar- chy.1556 However, this cryptic statement was not interpreted by Czernin to the effect that not a single word had been said with regard to the southern Slav and Italian parts of the Monarchy, and Galicia and the Polish problem were also left unmentioned. The Minister’s interpretation of the initiative was fundamentally incorrect, since he was of the opinion that the American ambassador was acting on behalf of a war-weary En- tente. Czernin then told him that the Danube Monarchy would only enter into peace negotiations jointly with its ally.1557 The Minister had also received information from Russia that indicated that a dramatic development was taking place there. For this reason, a proposal aimed at establishing a two-thirds monarchy was no longer worthy of consideration. For all that, the question also arose of whether the Monarchy was in a position to simply exit the war. There were already severe supply shortages, and on the other hand, an immensely overheated war economy. Even so, Count Czernin refused to countenance any war-weariness. In his view, a radicalisation of a population oriented towards a peace with victory could however equally be used against its own leadership and against the Monarch. There could be civil war. How would the German Empire, or the army leadership, react ? After all, in 1917, Hindenburg had stated that it would be
zurück zum  Buch THE FIRST WORLD WAR - and the End of the Habsburg Monarchy, 1914 – 1918"
THE FIRST WORLD WAR and the End of the Habsburg Monarchy, 1914 – 1918
Entnommen aus der FWF-E-Book-Library