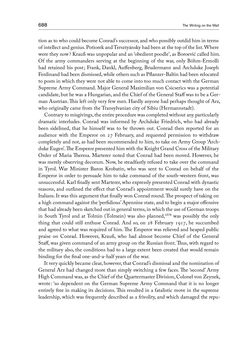 688 The Writing on the Wall tion as to who could become Conrad’s successor, and who possibly outdid him in terms of intellect and genius. Potiorek and Tersztyánsky had been at the top of the list. Where were they now ? Krauß was unpopular and an ‘obedient poodle’, as Boroević called him. Of the army commanders serving at the beginning of the war, only Böhm-Ermolli had retained his post ; Frank, Dankl, Auffenberg, Brudermann and Archduke Joseph Ferdinand had been dismissed, while others such as Pflanzer-Baltin had been relocated to posts in which they were not able to come into too much contact with the German Supreme Army Command. Major General Maximilian von Csicserics was a potential candidate, but he was a Hungarian, and the Chief of the General Staff was to be a Ger- man Austrian. This left only very few men. Hardly anyone had perhaps thought of Arz, who originally came from the Transylvanian city of Sibiu (Hermannstadt). Contrary to misgivings, the entire procedure was completed without any particularly dramatic interludes. Conrad was informed by Archduke Friedrich, who had already been sidelined, that he himself was to be thrown out. Conrad then reported for an audience with the Emperor on 27 February, and requested permission to withdraw completely and not, as had been recommended to him, to take on Army Group ‘Arch- duke Eugen’. The Emperor presented him with the Knight Grand Cross of the Military Order of Maria Theresa. Marterer noted that Conrad had been moved. However, he was merely observing decorum. Now, he steadfastly refused to take over the command in Tyrol. War Minister Baron Krobatin, who was sent to Conrad on behalf of the Emperor in order to persuade him to take command of the south-western front, was unsuccessful. Karl finally sent Marterer, who expressly presented Conrad with dynastic reasons, and outlined the effect that Conrad’s appointment would surely have on the Italians. It was this argument that finally won Conrad round. The prospect of taking on a high command against the ‘perfidious’ Apennine state, and to begin a major offensive that had already been sketched out in general terms, in which the use of German troops in South Tyrol and at Tolmin (Tolmein) was also planned,1570 was possibly the only thing that could still enthuse Conrad. And so, on 28 February 1917, he succumbed and agreed to what was required of him. The Emperor was relieved and heaped public praise on Conrad. However, Krauß, who had almost become Chief of the General Staff, was given command of an army group on the Russian front. Thus, with regard to the military also, the conditions had to a large extent been created that would remain binding for the final one-and-a-half years of the war. It very quickly became clear, however, that Conrad’s dismissal and the nomination of General Arz had changed more than simply switching a few faces. The ‘second’ Army High Command was, as the Chief of the Quartermaster Division, Colonel von Zeynek, wrote : ‘so dependent on the German Supreme Army Command that it is no longer entirely free in making its decisions. This resulted in a fatalistic move in the supreme leadership, which was frequently described as a frivolity, and which damaged the repu-
zurück zum  Buch THE FIRST WORLD WAR - and the End of the Habsburg Monarchy, 1914 – 1918"
THE FIRST WORLD WAR and the End of the Habsburg Monarchy, 1914 – 1918
Entnommen aus der FWF-E-Book-Library