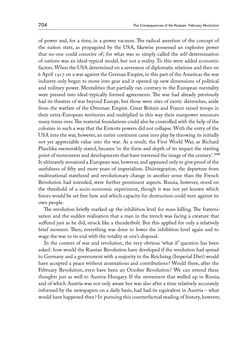 704 The Consequences of the Russian February Revolution of power and, for a time, in a power vacuum. The radical assertion of the concept of the nation state, as propagated by the USA, likewise possessed an explosive power that no-one could conceive of ; for what was so simply called the self-determination of nations was an ideal-typical model, but not a reality. To this were added economic factors. When the USA determined on a severance of diplomatic relations and then on 6 April 1917 on a war against the German Empire, in this part of the Americas the war industry only began to move into gear and it opened up new dimensions of political and military power. Mentalities that partially ran contrary to the European mentality were pressed into ideal-typically formed agreements. The war had already previously had its theatres of war beyond Europe, but those were sites of exotic skirmishes, aside from the warfare of the Ottoman Empire. Great Britain and France raised troops in their extra-European territories and multiplied in this way their manpower resources many times over. The material foundations could also be controlled with the help of the colonies in such a way that the Entente powers did not collapse. With the entry of the USA into the war, however, an entire continent came into play by throwing its initially not yet appreciable value into the war. As a result, the First World War, as Richard Plaschka memorably stated, became ‘in the form and depth of its impact the starting point of movements and developments that have traversed the image of the century’.1608 It ultimately remained a European war, however, and appeared only to give proof of the usefulness of fifty and more years of imperialism. Disintegration, the departure from multinational statehood and revolutionary change in another sense than the French Revolution had intended, were further prominent aspects. Russia, however, stood on the threshold of a socio-economic experiment, though it was not yet known which forces would be set free here and which capacity for destruction could turn against its own people. The revolution briefly marked up the inhibition level for mass killing. The fraterni- sation and the sudden realisation that a man in the trench was facing a creature that suffered just as he did, struck like a thunderbolt. But this applied for only a relatively brief moment. Then, everything was done to lower the inhibition level again and to wage the war to its end with the totality at one’s disposal. In the context of war and revolution, the very obvious ‘what if ’ question has been asked : how would the Russian Revolution have developed if the revolution had spread to Germany and a government with a majority in the Reichstag (Imperial Diet) would have accepted a peace without annexations and contributions ? Would there, after the February Revolution, even have been an October Revolution ? We can extend these thoughts just as well to Austria-Hungary. If the movement that welled up in Russia, and of which Austria was not only aware but was also after a time relatively accurately informed by the newspapers on a daily basis, had had its equivalent in Austria  – what would have happened then ? In pursuing this counterfactual reading of history, however,
zurück zum  Buch THE FIRST WORLD WAR - and the End of the Habsburg Monarchy, 1914 – 1918"
THE FIRST WORLD WAR and the End of the Habsburg Monarchy, 1914 – 1918
Entnommen aus der FWF-E-Book-Library