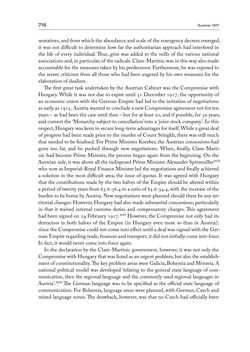 716 Summer 1917 sentatives, and from which the abundance and scale of the emergency decrees emerged, it was not difficult to determine how far the authoritarian approach had interfered in the life of every individual. Thus, grist was added to the mills of the various national associations and, in particular, of the radicals. Clam-Martinic was in this way also made accountable for the measures taken by his predecessor. Furthermore, he was exposed to the severe criticism from all those who had been angered by his own measures for the elaboration of dualism. The first great task undertaken by the Austrian Cabinet was the Compromise with Hungary. While it was not due to expire until 31 December 1917, the opportunity of an economic union with the German Empire had led to the initiation of negotiations as early as 1915. Austria wanted to conclude a new Compromise agreement not for ten years  – as had been the case until then  – but for at least 20, and if possible, for 30 years, and convert the ‘Monarchy subject to cancellation’ into a ‘joint stock company’. In this respect, Hungary was keen to secure long-term advantages for itself. While a great deal of progress had been made prior to the murder of Count Stürgkh, there was still much that needed to be finalised. For Prime Minister Koerber, the Austrian concessions had gone too far, and he pushed through new negotiations. When, finally, Clam-Marti- nic had become Prime Minister, the process began again from the beginning. On the Austrian side, it was above all the indisposed Prime Minister Alexander Spitzmüller1632 who now as Imperial-Royal Finance Minister led the negotiations and finally achieved a solution in the most difficult area, the issue of quotas. It was agreed with Hungary that the contributions made by the two halves of the Empire should be altered within a period of twenty years from 63.6 :36.4 to a ratio of 65.6 :34.4, with the increase of the burden to be borne by Austria. New negotiations were planned should there be any ter- ritorial changes. However, Hungary had also made substantial concessions, particularly in that it waived internal customs duties and compensatory charges. This agreement had been signed on 24 February 1917.1633 However, the Compromise not only had its detractors in both halves of the Empire (in Hungary even more so than in Austria) : since the Compromise could not come into effect until a deal was signed with the Ger- man Empire regarding trade, finances and transport, it did not initially come into force. In fact, it would never come into force again. In the declaration by the Clam-Martinic government, however, it was not only the Compromise with Hungary that was listed as an urgent problem, but also the establish- ment of constitutionality. The key problem areas were Galicia, Bohemia and Moravia. A national political model was developed ‘relating to the general state language of com- munication, then the regional language and the commonly used regional languages in Austria’.1634 The German language was to be specified as the official state language of communication. For Bohemia, language areas were planned, with German, Czech and mixed language zones. The drawback, however, was that no Czech had officially been
zurück zum  Buch THE FIRST WORLD WAR - and the End of the Habsburg Monarchy, 1914 – 1918"
THE FIRST WORLD WAR and the End of the Habsburg Monarchy, 1914 – 1918
Entnommen aus der FWF-E-Book-Library