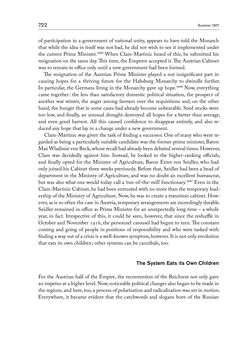 722 Summer 1917 of participation in a government of national unity, appears to have told the Monarch that while the idea in itself was not bad, he did not wish to see it implemented under the current Prime Minister.1645 When Clam-Martinic heard of this, he submitted his resignation on the same day. This time, the Emperor accepted it. The Austrian Cabinet was to remain in office only until a new government had been formed. The resignation of the Austrian Prime Minister played a not insignificant part in causing hopes for a thriving future for the Habsburg Monarchy to dwindle further. In particular, the Germans living in the Monarchy gave up hope.1646 Now, everything came together : the less than satisfactory domestic political situation, the prospect of another war winter, the anger among farmers over the requisitions and, on the other hand, the hunger that in some cases had already become unbearable. Seed stocks were too low, and finally, an unusual drought destroyed all hopes for a better than average, and even good harvest. All this caused confidence to disappear entirely, and also re- duced any hope that lay in a change under a new government. Clam-Martinic was given the task of finding a successor. One of many who were re- garded as being a particularly suitable candidate was the former prime minister, Baron Max Wladimir von Beck, whose recall had already been debated several times. However, Clam was decidedly against him. Instead, he looked to the higher-ranking officials, and finally opted for the Minister of Agriculture, Baron Ernst von Seidler, who had only joined his Cabinet three weeks previously. Before that, Seidler had been a head of department in the Ministry of Agriculture, and was no doubt an excellent bureaucrat, but was also what one would today call a ‘run-of-the-mill’ functionary.1647 Even in the Clam-Martinic Cabinet, he had been entrusted with no more than the temporary lead- ership of the Ministry of Agriculture. Now, he was to create a transition cabinet. How- ever, as is so often the case in Austria, temporary arrangements are exceedingly durable. Seidler remained in office as Prime Minister for an unexpectedly long time  – a whole year, in fact. Irrespective of this, it could be seen, however, that since the reshuffle in October and November 1916, the personnel carousel had begun to turn. The constant coming and going of people in positions of responsibility and who were tasked with finding a way out of a crisis is a well-known symptom, however. It is not only revolution that eats its own children ; other systems can be cannibals, too. The System Eats its Own Children For the Austrian half of the Empire, the reconvention of the Reichsrat not only gave an impetus at a higher level. Now, noticeable political changes also began to be made in the regions, and here, too, a process of polarisation and radicalisation was set in motion. Everywhere, it became evident that the catchwords and slogans born of the Russian
zurück zum  Buch THE FIRST WORLD WAR - and the End of the Habsburg Monarchy, 1914 – 1918"
THE FIRST WORLD WAR and the End of the Habsburg Monarchy, 1914 – 1918
Entnommen aus der FWF-E-Book-Library