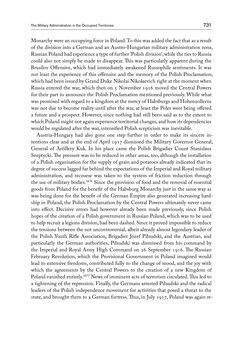 The﻿ Military﻿ Administration﻿ in﻿ the﻿ Occupied﻿ Territories 731 Monarchy were an occupying force in Poland. To this was added the fact that as a result of the division into a German and an Austro-Hungarian military administration zone, Russian Poland had experience a type of further ‘Polish division’, while the ties to Russia could also not simply be made to disappear. This was particularly apparent during the Brusilov Offensive, which had immediately awakened Russophile sentiments. It was not least the experience of this offensive and the memory of the Polish Proclamation, which had been issued by Grand Duke Nikolai Nikolaevich right at the moment when Russia entered the war, which then on 5 November 1916 moved the Central Powers for their part to announce the Polish Proclamation mentioned previously. While what was promised with regard to a kingdom at the mercy of Habsburgs and Hohenzollerns was not due to become reality until after the war, at least the Poles were being offered a future and a prospect. However, since nothing had still been said as to the extent to which Poland might not again experience territorial changes, and how its dependencies would be regulated after the war, intensified Polish scepticism was inevitable. Austria-Hungary had also gone one step further in order to make its sincere in- tentions clear and at the end of April 1917 dismissed the Military Governor General, General of Artillery Kuk. In his place came the Polish Brigadier Count Stanislaus Szeptycki. The pressure was to be reduced in other areas, too, although the installation of a Polish organisation for the supply of grain and potatoes already indicated that its degree of success lagged far behind the expectations of the Imperial and Royal military administration, and recourse was taken to the system of friction reduction through the use of military bodies.1676 Since the provision of food and the removal of essential goods from Poland for the benefit of the Habsburg Monarchy just in the same way as was being done for the benefit of the German Empire also generated increasing hard- ship in Poland, the Polish Proclamation by the Central Powers ultimately never came into effect. Decisive errors had however already been made previously, since Polish hopes of the creation of a Polish government in Russian Poland, which was to be used to help recruit a legions division, had been dashed. Since it proved impossible to reduce the tensions between the not uncontroversial, albeit already almost legendary leader of the Polish Youth Rifle Association, Brigadier Józef Piłsudski, and the Austrian, and particularly the German authorities, Piłsudski was dismissed from his command by the Imperial and Royal Army High Command on 26 September 1916. The Russian February Revolution, which the Provisional Government in Poland imagined would lead to extensive freedoms, contributed fully to the change of mood, and the joy with which the agreements by the Central Powers to the creation of a new Kingdom of Poland vanished entirely.1677 News of imminent acts of terrorism circulated. This led to a tightening of the repression. Finally, the Germans arrested Piłsudski and the radical leaders of the Polish independence movement for activities that posed a threat to the state, and brought them to a German fortress. Thus, in July 1917, Poland was again re-
zurück zum  Buch THE FIRST WORLD WAR - and the End of the Habsburg Monarchy, 1914 – 1918"
THE FIRST WORLD WAR and the End of the Habsburg Monarchy, 1914 – 1918
Entnommen aus der FWF-E-Book-Library