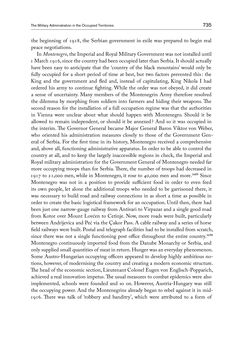 The﻿ Military﻿ Administration﻿ in﻿ the﻿ Occupied﻿ Territories 735 the beginning of 1918, the Serbian government in exile was prepared to begin real peace negotiations. In Montenegro, the Imperial and Royal Military Government was not installed until 1 March 1916, since the country had been occupied later than Serbia. It should actually have been easy to anticipate that the ‘country of the black mountains’ would only be fully occupied for a short period of time at best, but two factors prevented this : the King and the government and fled and, instead of capitulating, King Nikola I had ordered his army to continue fighting. While the order was not obeyed, it did create a sense of uncertainty. Many members of the Montenegrin Army therefore resolved the dilemma by morphing from soldiers into farmers and hiding their weapons. The second reason for the installation of a full occupation regime was that the authorities in Vienna were unclear about what should happen with Montenegro. Should it be allowed to remain independent, or should it be annexed ? And so it was occupied in the interim. The Governor General became Major General Baron Viktor von Weber, who oriented his administration measures closely to those of the Government Gen- eral of Serbia. For the first time in its history, Montenegro received a comprehensive and, above all, functioning administrative apparatus. In order to be able to control the country at all, and to keep the largely inaccessible regions in check, the Imperial and Royal military administration for the Government General of Montenegro needed far more occupying troops than for Serbia. There, the number of troops had decreased in 1917 to 21,000 men, while in Montenegro, it rose to 40,000 men and more.1689 Since Montenegro was not in a position to provide sufficient food in order to even feed its own people, let alone the additional troops who needed to be garrisoned there, it was necessary to build road and railway connections in as short a time as possible in order to create the basic logistical framework for an occupation. Until then, there had been just one narrow-gauge railway from Antivari to Virpazar and a single good road from Kotor over Mount Lovćen to Cetinje. Now, more roads were built, particularly between Andrijevica and Peć via the Çakor Pass. A cable railway and a series of horse field railways were built. Postal and telegraph facilities had to be installed from scratch, since there was not a single functioning post office throughout the entire country.1690 Montenegro continuously imported food from the Danube Monarchy or Serbia, and only supplied small quantities of meat in return. Hunger was an everyday phenomenon. Some Austro-Hungarian occupying officers appeared to develop highly ambitious no- tions, however, of modernising the country and creating a modern economic structure. The head of the economic section, Lieutenant Colonel Eugen von Englisch-Popparich, achieved a real innovation impetus. The usual measures to combat epidemics were also implemented, schools were founded and so on. However, Austria-Hungary was still the occupying power. And the Montenegrins already began to rebel against it in mid- 1916. There was talk of ‘robbery and banditry’, which were attributed to a form of
zurück zum  Buch THE FIRST WORLD WAR - and the End of the Habsburg Monarchy, 1914 – 1918"
THE FIRST WORLD WAR and the End of the Habsburg Monarchy, 1914 – 1918
Entnommen aus der FWF-E-Book-Library