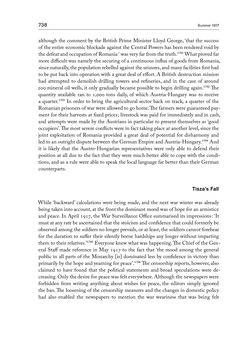 738 Summer 1917 although the comment by the British Prime Minister Lloyd George, ‘that the success of the entire economic blockade against the Central Powers has been rendered void by the defeat and occupation of Romania ‘ was very far from the truth.1701 What proved far more difficult was namely the securing of a continuous influx of goods from Romania, since naturally, the population rebelled against the seizures, and many facilities first had to be put back into operation with a great deal of effort. A British destruction mission had attempted to demolish drilling towers and refineries, and in the case of around 200 mineral oil wells, it only gradually became possible to begin drilling again.1702 The quantity available ran to 1,000 tons daily, of which Austria-Hungary was to receive a quarter.1703 In order to bring the agricultural sector back on track, a quarter of the Romanian prisoners of war were allowed to go home. The farmers were guaranteed pay- ment for their harvests at fixed prices ; livestock was paid for immediately and in cash, and attempts were made by the Austrians in particular to present themselves as ‘good occupiers’. The most severe conflicts were in fact taking place at another level, since the joint exploitation of Romania provided a great deal of potential for disharmony and led to an outright dispute between the German Empire and Austria-Hungary.1704 And it is likely that the Austro-Hungarian representatives were only able to defend their position at all due to the fact that they were much better able to cope with the condi- tions, and as a rule were able to speak the local language far better than their German counterparts. Tisza’s Fall While ‘backward’ calculations were being made, and the next war winter was already being taken into account, at the front the dominant mood was of hope for an armistice and peace. In April 1917, the War Surveillance Office summarised its impressions : ‘It must at any rate be ascertained that the stoicism and confidence that could formerly be observed among the soldiers no longer prevails, or at least, the soldiers cannot forebear for the duration to suffer their silently borne hardships any longer without imparting them to their relatives.’1705 Everyone knew what was happening. The Chief of the Gen- eral Staff made reference in May 1917 to the fact that ‘the mood among the general public in all parts of the Monarchy [is] dominated less by confidence in victory than primarily by the hope and yearning for peace’.1706 The censorship reports, however, also claimed to have found that the political statements and broad speculations were de- creasing. Only the desire for peace was felt everywhere. Although the newspapers were forbidden from writing anything about wishes for peace, the editors simply ignored the ban. The loosening of the censorship measures and the changes in domestic policy had also enabled the newspapers to mention the war weariness that was being felt
zurück zum  Buch THE FIRST WORLD WAR - and the End of the Habsburg Monarchy, 1914 – 1918"
THE FIRST WORLD WAR and the End of the Habsburg Monarchy, 1914 – 1918
Entnommen aus der FWF-E-Book-Library