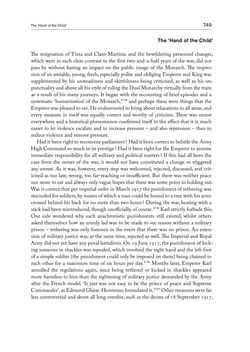 The﻿ ‘Hand﻿ of﻿ the﻿ Child’ 749 The ‘Hand of the Child’ The resignation of Tisza and Clam-Martinic and the bewildering personnel changes, which were in such clear contrast to the first two-and-a-half years of the war, did not pass by without having an impact on the public image of the Monarch. The impres- sion of an amiable, young, fresh, especially polite and obliging Emperor and King was supplemented by his unsteadiness and skittishness being criticised, as well as his un- punctuality and above all his style of ruling the Dual Monarchy virtually from the train as a result of his many journeys. It began with the recounting of brief episodes and a systematic ‘humanisation’ of the Monarch,1734 and perhaps these were things that the Emperor was pleased to see. He endeavoured to bring about relaxations in all areas, and every measure in itself was equally correct and worthy of criticism. There was unrest everywhere and a historical phenomenon confirmed itself to the effect that it is much easier to let violence escalate and to increase pressure  – and also repression  – than to reduce violence and remove pressure. Had it been right to reconvene parliament ? Had it been correct to belittle the Army High Command so much in its prestige ? Had it been right for the Emperor to assume immediate responsibility for all military and political matters ? If this had all been the case from the outset of the war, it would not have constituted a change or triggered any unrest. As it was, however, every step was welcomed, rejected, discussed, and crit- icised as too late, wrong, too far-reaching or insufficient. But there was neither peace nor more to eat and always only vague hopes that there was some point in holding out. Was it correct that per imperial order in March 1917 the punishment of tethering was rescinded for soldiers, by means of which a man could be bound to a tree with his arms crossed behind his back for no more than two hours ? During the war, beating with a stick had been reintroduced, though unofficially, of course.1735 Karl strictly forbade this. One side wondered why such anachronistic punishments still existed, whilst others asked themselves how an unruly lad was to be made to see reason without a military prison  – tethering was only foreseen in the event that there was no prison. An exten- sion of military justice was, at the same time, rejected as well. The Imperial and Royal Army did not yet have any penal battalions. On 19 June 1917, the punishment of lock- ing someone in shackles was repealed, which involved the right hand and the left foot of a simple soldier (the punishment could only be imposed on them) being chained to each other for a maximum time of six hours per day.1736 Months later, Emperor Karl annulled the regulations again, since being tethered or locked in shackles appeared more harmless to him than the tightening of military justice demanded by the Army after the French model. ‘It just was not easy to be the prince of peace and Supreme Commander’, as Edmund Glaise-Horstenau formulated it.1737 Other measures were far less controversial and above all long overdue, such as the decree of 18 September 1917,
zurück zum  Buch THE FIRST WORLD WAR - and the End of the Habsburg Monarchy, 1914 – 1918"
THE FIRST WORLD WAR and the End of the Habsburg Monarchy, 1914 – 1918
Entnommen aus der FWF-E-Book-Library