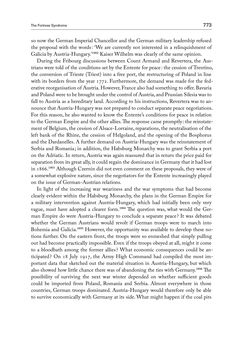 The﻿ Fortress﻿ Syndrome 773 so now the German Imperial Chancellor and the German military leadership refused the proposal with the words : ‘We are currently not interested in a relinquishment of Galicia by Austria-Hungary.’1802 Kaiser Wilhelm was clearly of the same opinion. During the Fribourg discussions between Count Armand and Revertera, the Aus- trians were told of the conditions set by the Entente for peace : the cession of Trentino, the conversion of Trieste (Triest) into a free port, the restructuring of Poland in line with its borders from the year 1772. Furthermore, the demand was made for the fed- erative reorganisation of Austria. However, France also had something to offer. Bavaria and Poland were to be brought under the control of Austria, and Prussian Silesia was to fall to Austria as a hereditary land. According to his instructions, Revertera was to an- nounce that Austria-Hungary was not prepared to conduct separate peace negotiations. For this reason, he also wanted to know the Entente’s conditions for peace in relation to the German Empire and the other allies. The response came promptly : the reinstate- ment of Belgium, the cession of Alsace-Lorraine, reparations, the neutralisation of the left bank of the Rhine, the cession of Helgoland, and the opening of the Bosphorus and the Dardanelles. A further demand on Austria-Hungary was the reinstatement of Serbia and Romania ; in addition, the Habsburg Monarchy was to grant Serbia a port on the Adriatic. In return, Austria was again reassured that in return the price paid for separation from its great ally, it could regain the dominance in Germany that it had lost in 1866.1803 Although Czernin did not even comment on these proposals, they were of a somewhat explosive nature, since the negotiators for the Entente increasingly played on the issue of German-Austrian relations. In light of the increasing war weariness and the war symptoms that had become clearly evident within the Habsburg Monarchy, the plans in the German Empire for a military intervention against Austria-Hungary, which had initially been only very vague, must have adopted a clearer form.1804 The question was, what would the Ger- man Empire do were Austria-Hungary to conclude a separate peace ? It was debated whether the German Austrians would revolt if German troops were to march into Bohemia and Galicia.1805 However, the opportunity was available to develop these no- tions further. On the eastern front, the troops were so enmeshed that simply pulling out had become practically impossible. Even if the troops obeyed at all, might it come to a bloodbath among the former allies ? What economic consequences could be an- ticipated ? On 18 July 1917, the Army High Command had compiled the most im- portant data that sketched out the material situation in Austria-Hungary, but which also showed how little chance there was of abandoning the ties with Germany.1806 The possibility of surviving the next war winter depended on whether sufficient goods could be imported from Poland, Romania and Serbia. Almost everywhere in those countries, German troops dominated. Austria-Hungary would therefore only be able to survive economically with Germany at its side. What might happen if the coal pits
zurück zum  Buch THE FIRST WORLD WAR - and the End of the Habsburg Monarchy, 1914 – 1918"
THE FIRST WORLD WAR and the End of the Habsburg Monarchy, 1914 – 1918
Entnommen aus der FWF-E-Book-Library