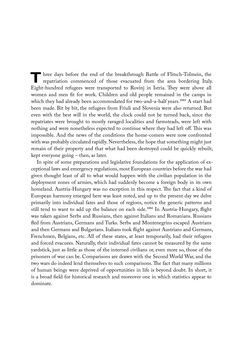 Three days before the end of the breakthrough Battle of Flitsch-Tolmein, the repatriation commenced of those evacuated from the area bordering Italy. Eight-hundred refugees were transported to Rovinj in Istria. They were above all women and men fit for work. Children and old people remained in the camps in which they had already been accommodated for two-and-a-half years.1881 A start had been made. Bit by bit, the refugees from Friuli and Slovenia were also returned. But even with the best will in the world, the clock could not be turned back, since the repatriates were brought to mostly ravaged localities and farmsteads, were left with nothing and were nonetheless expected to continue where they had left off. This was impossible. And the news of the conditions the home-comers were now confronted with was probably circulated rapidly. Nevertheless, the hope that something might just remain of their property and that what had been destroyed could be quickly rebuilt, kept everyone going  – then, as later. In spite of some preparations and legislative foundations for the application of ex- ceptional laws and emergency regulations, most European countries before the war had given thought least of all to what would happen with the civilian population in the deployment zones of armies, which had suddenly become a foreign body in its own homeland. Austria-Hungary was no exception in this respect. The fact that a kind of European harmony emerged here was least noted, and up to the present day we delve primarily into individual fates and those of regions, notice the generic patterns and still tend to want to add up the balance on each side.1882 In Austria-Hungary, flight was taken against Serbs and Russians, then against Italians and Romanians. Russians fled from Austrians, Germans and Turks. Serbs and Montenegrins escaped Austrians and then Germans and Bulgarians. Italians took flight against Austrians and Germans, Frenchmen, Belgians, etc. All of these states, at least temporarily, had their refugees and forced evacuees. Naturally, their individual fates cannot be measured by the same yardstick, just as little as those of the interned civilians or, even more so, those of the prisoners of war can be. Comparisons are drawn with the Second World War, and the two wars do indeed lend themselves to such comparisons. The fact that many millions of human beings were deprived of opportunities in life is beyond doubt. In short, it is a broad field for historical research and moreover one in which statistics appear to dominate.
zurück zum  Buch THE FIRST WORLD WAR - and the End of the Habsburg Monarchy, 1914 – 1918"
THE FIRST WORLD WAR and the End of the Habsburg Monarchy, 1914 – 1918
Entnommen aus der FWF-E-Book-Library