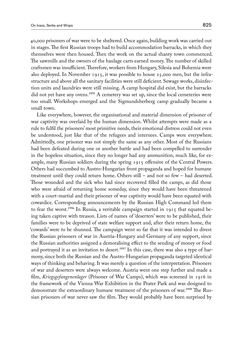 On﻿ Ivans,﻿ Serbs﻿ and﻿ Wops 825 40,000 prisoners of war were to be sheltered. Once again, building work was carried out in stages. The first Russian troops had to build accommodation barracks, in which they themselves were then housed. Then the work on the actual shanty town commenced. The sawmills and the owners of the haulage carts earned money. The number of skilled craftsmen was insufficient. Therefore, workers from Hungary, Silesia and Bohemia were also deployed. In November 1915, it was possible to house 25,000 men, but the infra- structure and above all the sanitary facilities were still deficient. Sewage works, disinfec- tion units and laundries were still missing. A camp hospital did exist, but the barracks did not yet have any ovens.1955 A cemetery was set up, since the local cemeteries were too small. Workshops emerged and the Sigmundsherberg camp gradually became a small town. Like everywhere, however, the organisational and material dimension of prisoner of war captivity was overlaid by the human dimension. Whilst attempts were made as a rule to fulfil the prisoners’ most primitive needs, their emotional distress could not even be understood, just like that of the refugees and internees. Camps were everywhere. Admittedly, one prisoner was not simply the same as any other. Most of the Russians had been defeated during one or another battle and had been compelled to surrender in the hopeless situation, since they no longer had any ammunition, much like, for ex- ample, many Russian soldiers during the spring 1915 offensive of the Central Powers. Others had succumbed to Austro-Hungarian front propaganda and hoped for humane treatment until they could return home. Others still  – and not so few  – had deserted. Those wounded and the sick who had since recovered filled the camps, as did those who were afraid of returning home someday, since they would have been threatened with a court-martial and their prisoner of war captivity would have been equated with cowardice. Corresponding announcements by the Russian High Command led them to fear the worst.1956 In Russia, a veritable campaign started in 1915 that equated be- ing taken captive with treason. Lists of names of ‘deserters’ were to be published, their families were to be deprived of state welfare support and, after their return home, the ‘cowards’ were to be shunned. The campaign went so far that it was intended to divest the Russian prisoners of war in Austria-Hungary and Germany of any support, since the Russian authorities assigned a demoralising effect to the sending of money or food and portrayed it as an invitation to desert.1957 In this case, there was also a type of har- mony, since both the Russian and the Austro-Hungarian propaganda targeted identical ways of thinking and behaving. It was merely a question of the interpretation. Prisoners of war and deserters were always welcome. Austria went one step further and made a film, Kriegsgefangenenlager (Prisoner of War Camps), which was screened in 1916 in the framework of the Vienna War Exhibition in the Prater Park and was designed to demonstrate the extraordinary humane treatment of the prisoners of war.1958 The Rus- sian prisoners of war never saw the film. They would probably have been surprised by
zurück zum  Buch THE FIRST WORLD WAR - and the End of the Habsburg Monarchy, 1914 – 1918"
THE FIRST WORLD WAR and the End of the Habsburg Monarchy, 1914 – 1918
Entnommen aus der FWF-E-Book-Library