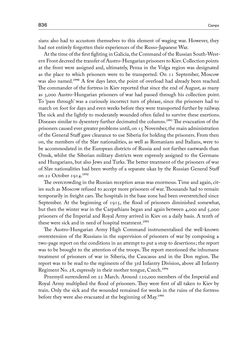 836 Camps sians also had to accustom themselves to this element of waging war. However, they had not entirely forgotten their experiences of the Russo-Japanese War. At the time of the first fighting in Galicia, the Command of the Russian South-West- ern Front decreed the transfer of Austro-Hungarian prisoners to Kiev. Collection points at the front were assigned and, ultimately, Penza in the Volga region was designated as the place to which prisoners were to be transported. On 11 September, Moscow was also named.1990 A few days later, the point of overload had already been reached. The commander of the fortress in Kiev reported that since the end of August, as many as 3,000 Austro-Hungarian prisoners of war had passed through his collection point. To ‘pass through’ was a curiously incorrect turn of phrase, since the prisoners had to march on foot for days and even weeks before they were transported further by railway. The sick and the lightly to moderately wounded often failed to survive these exertions. Diseases similar to dysentery further decimated the columns.1991 The evacuation of the prisoners caused ever greater problems until, on 15 November, the main administration of the General Staff gave clearance to use Siberia for holding the prisoners. From then on, the members of the Slav nationalities, as well as Romanians and Italians, were to be accommodated in the European districts of Russia and not further eastwards than Omsk, whilst the Siberian military districts were expressly assigned to the Germans and Hungarians, but also Jews and Turks. The better treatment of the prisoners of war of Slav nationalities had been worthy of a separate ukaz by the Russian General Staff on 22 October 1914.1992 The overcrowding in the Russian reception areas was enormous. Time and again, cit- ies such as Moscow refused to accept more prisoners of war. Thousands had to remain temporarily in freight cars. The hospitals in the base zone had been overstretched since September. At the beginning of 1915, the flood of prisoners diminished somewhat, but then the winter war in the Carpathians began and again between 4,000 and 5,000 prisoners of the Imperial and Royal Army arrived in Kiev on a daily basis. A tenth of these were sick and in need of hospital treatment.1993 The Austro-Hungarian Army High Command instrumentalised the well-known overextension of the Russians in the supervision of prisoners of war by composing a two-page report on the conditions in an attempt to put a stop to desertions ; the report was to be brought to the attention of the troops. The report mentioned the inhumane treatment of prisoners of war in Siberia, the Caucasus and in the Don region. The report was to be read to the regiments of the 3rd Infantry Division, above all Infantry Regiment No. 28, expressly in their mother tongue, Czech.1994 Przemyśl surrendered on 22 March. Around 120,000 members of the Imperial and Royal Army multiplied the flood of prisoners. They were first of all taken to Kiev by train. Only the sick and the wounded remained for weeks in the ruins of the fortress before they were also evacuated at the beginning of May.1995
zurück zum  Buch THE FIRST WORLD WAR - and the End of the Habsburg Monarchy, 1914 – 1918"
THE FIRST WORLD WAR and the End of the Habsburg Monarchy, 1914 – 1918
Entnommen aus der FWF-E-Book-Library