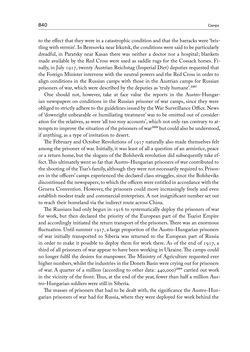 840 Camps to the effect that they were in a catastrophic condition and that the barracks were ‘bris- tling with vermin’. In Beresovka near Irkutsk, the conditions were said to be particularly dreadful, in Paratsky near Kasan there was neither a doctor nor a hospital ; blankets made available by the Red Cross were used as saddle rugs for the Cossack horses. Fi- nally, in July 1917, twenty Austrian Reichstag (Imperial Diet) deputies requested that the Foreign Minister intervene with the neutral powers and the Red Cross in order to align conditions in the Russian camps with those in the Austrian camps for Russian prisoners of war, which were described by the deputies as ‘truly humane’.2007 One should not, however, take at face value the reports in the Austro-Hungar- ian newspapers on conditions in the Russian prisoner of war camps, since they were obliged to strictly adhere to the guidelines issued by the War Surveillance Office. News of ‘downright unbearable or humiliating treatment’ was to be omitted out of consider- ation for the relatives, as were ‘all too rosy accounts’, which not only ran contrary to at- tempts to improve the situation of the prisoners of war2008 but could also be understood, if anything, as a type of invitation to desert. The February and October Revolutions of 1917 naturally also made themselves felt among the prisoner of war. Initially, it was least of all a question of an armistice, peace or a return home, but the slogans of the Bolshevik revolution did subsequently take ef- fect. This ultimately went so far that Austro-Hungarian prisoners of war contributed to the shooting of the Tsar’s family, although they were not necessarily required to. Prison- ers in the officers’ camps experienced the declared class struggles, since the Bolsheviks discontinued the newspapers, to which the officers were entitled in accordance with the Geneva Convention. However, the prisoners could move increasingly freely and even establish modest trade and commercial enterprises. A not insignificant number set out to reach their homeland via the indirect route across China. The Russians had only begun in 1916 to systematically deploy the prisoners of war for work, but then declared the priority of the European part of the Tsarist Empire and accordingly initiated the return transport of the prisoners. There was an enormous fluctuation. Until summer 1917, a large proportion of the Austro-Hungarian prisoners of war initially transported to Siberia was returned to the European part of Russia in order to make it possible to deploy them for work there. As of the end of 1917, a third of all prisoners of war appear to have been working in Ukraine. The camps could no longer fulfil the desires for manpower. The Ministry of Agriculture requested ever higher numbers, whilst the industries in the Donets Basin were crying out for prisoners of war. A quarter of a million (according to other data : 440,000)2009 carried out work in the vicinity of the front. Thus, at the end of the year, fewer than half a million Aus- tro-Hungarian soldiers were still in Siberia. The masses of prisoners that had to be dealt with, the significance the Austro-Hun- garian prisoners of war had for Russia, where they were deployed for work behind the
zurück zum  Buch THE FIRST WORLD WAR - and the End of the Habsburg Monarchy, 1914 – 1918"
THE FIRST WORLD WAR and the End of the Habsburg Monarchy, 1914 – 1918
Entnommen aus der FWF-E-Book-Library