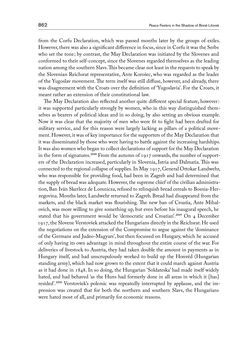 862 Peace Feelers in the Shadow of Brest-Litovsk from the Corfu Declaration, which was passed months later by the groups of exiles. However, there was also a significant difference in focus, since in Corfu it was the Serbs who set the tone ; by contrast, the May Declaration was initiated by the Slovenes and conformed to their self-concept, since the Slovenes regarded themselves as the leading nation among the southern Slavs. This became clear not least in the requests to speak by the Slovenian Reichsrat representative, Ante Korošec, who was regarded as the leader of the Yugoslav movement. The term itself was still diffuse, however, and already, there was disagreement with the Croats over the definition of ‘Yugoslavia’. For the Croats, it meant rather an extension of their constitutional law. The May Declaration also reflected another quite different special feature, however : it was supported particularly strongly by women, who in this way distinguished them- selves as bearers of political ideas and in so doing, by also setting an obvious example. Now it was clear that the majority of men who were fit to fight had been drafted for military service, and for this reason were largely lacking as pillars of a political move- ment. However, it was of key importance for the supporters of the May Declaration that it was disseminated by those who were having to battle against the increasing hardships. It was also women who began to collect declarations of support for the May Declaration in the form of signatures.2048 From the autumn of 1917 onwards, the number of support- ers of the Declaration increased, particularly in Slovenia, Istria and Dalmatia. This was connected to the regional collapse of supplies. In May 1917, General Ottokar Landwehr, who was responsible for providing food, had been in Zagreb and had determined that the supply of bread was adequate. However, the supreme chief of the civilian administra- tion, Ban Iván Skerlecz de Lomnicza, refused to relinquish bread cereals to Bosnia-Her- zegovina. Months later, Landwehr returned to Zagreb. Bread had disappeared from the markets, and the black market was flourishing. The new ban of Croatia, Ante Mihal- ovich, was more willing to give something up, but even before his inaugural speech, he stated that his government would be ‘democratic and Croatian’.2049 On 4 December 1917, the Slovene Verstovšek attacked the Hungarians directly in the Reichsrat. He used the negotiations on the extension of the Compromise to argue against the ‘dominance of the Germans and Judeo-Magyars’, but then focussed on Hungary, which he accused of only having its own advantage in mind throughout the entire course of the war. For deliveries of livestock to Austria, they had taken double the amount in payments as in Hungary itself, and had unscrupulously worked to build up the Honvéd (Hungarian standing army), which had now grown to the extent that it could march against Austria as it had done in 1848. In so doing, the Hungarian ‘Soldateska’ had made itself widely hated, and had behaved ‘as the Huns had formerly done in all areas in which it [has] resided’.2050 Verstovšek’s polemic was repeatedly interrupted by applause, and the im- pression was created that for both the northern and southern Slavs, the Hungarians were hated most of all, and primarily for economic reasons.
zurück zum  Buch THE FIRST WORLD WAR - and the End of the Habsburg Monarchy, 1914 – 1918"
THE FIRST WORLD WAR and the End of the Habsburg Monarchy, 1914 – 1918
Entnommen aus der FWF-E-Book-Library