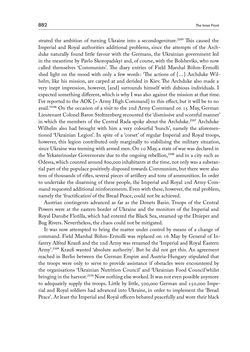 882 The Inner Front strated the ambition of turning Ukraine into a secondogeniture.2105 This caused the Imperial and Royal authorities additional problems, since the attempts of the Arch- duke naturally found little favour with the Germans, the Ukrainian government led in the meantime by Pavlo Skoropadskyi and, of course, with the Bolsheviks, who now called themselves ‘Communists’. The diary entries of Field Marshal Böhm-Ermolli shed light on the mood with only a few words : ‘The actions of […] Archduke Wil- helm, like his mission, are carped at and derided in Kiev. The Archduke also made a very inept impression, however, [and] surrounds himself with dubious individuals. I expected something different, which is why I was also against the mission at that time. I’ve reported to the AOK [= Army High Command] to this effect, but it will be to no avail.’2106 On the occasion of a visit to the 2nd Army Command on 15 May, German Lieutenant Colonel Baron Stoltzenberg recounted the ‘dismissive and scornful manner’ in which the members of the Central Rada spoke about the Archduke.2107 Archduke Wilhelm also had brought with him a very colourful ‘bunch’, namely the aforemen- tioned ‘Ukrainian Legion’. In spite of a ‘corset’ of regular Imperial and Royal troops, however, this legion contributed only marginally to stabilising the military situation, since Ukraine was teeming with armed men. On 10 May, a state of war was declared in the Yekaterinoslav Governorate due to the ongoing rebellion,2108 and in a city such as Odessa, which counted around 800,000 inhabitants at the time, not only was a substan- tial part of the populace positively disposed towards Communism, but there were also tens of thousands of rifles, several pieces of artillery and tons of ammunition. In order to undertake the disarming of these people, the Imperial and Royal 2nd Army Com- mand requested additional reinforcements. Even with these, however, the real problem, namely the ‘fructification’ of the Bread Peace, could not be achieved. Austrian contingents advanced as far as the Donets Basin. Troops of the Central Powers were at the eastern border of Ukraine and the monitors of the Imperial and Royal Danube Flotilla, which had entered the Black Sea, steamed up the Dnieper and Bug Rivers. Nevertheless, the chaos could not be mitigated. It was now attempted to bring the matter under control by means of a change of command. Field Marshal Böhm-Ermolli was replaced on 16 May by General of In- fantry Alfred Krauß and the 2nd Army was renamed the ‘Imperial and Royal Eastern Army’.2109 Krauß wanted ‘absolute authority’. But he did not get this. An agreement reached in Berlin between the German Empire and Austria-Hungary stipulated that the troops were only to serve to provide assistance if obstacles were encountered by the organisations ‘Ukrainian Nutrition Council’ and ‘Ukrainian Food Council’whilst bringing in the harvest.2110 Now nothing else worked. It was not even possible anymore to adequately supply the troops. Little by little, 500,000 German and 250,000 Impe- rial and Royal soldiers had advanced into Ukraine, in order to implement the ‘Bread Peace’. At least the Imperial and Royal officers behaved peacefully and wore their black
zurück zum  Buch THE FIRST WORLD WAR - and the End of the Habsburg Monarchy, 1914 – 1918"
THE FIRST WORLD WAR and the End of the Habsburg Monarchy, 1914 – 1918
Entnommen aus der FWF-E-Book-Library