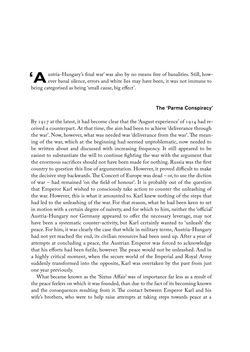 ‘A ustria-Hungary’s final war’ was also by no means free of banalities. Still, how-ever banal silence, errors and white lies may have been, it was not immune to being categorised as being ‘small cause, big effect’. The ‘Parma Conspiracy’ By 1917 at the latest, it had become clear that the ‘August experience’ of 1914 had re- ceived a counterpart. At that time, the aim had been to achieve ‘deliverance through the war’. Now, however, what was needed was ‘deliverance from the war’. The mean- ing of the war, which at the beginning had seemed unproblematic, now needed to be written about and discussed with increasing frequency. It still appeared to be easiest to substantiate the will to continue fighting the war with the argument that the enormous sacrifices should not have been made for nothing. Russia was the first country to question this line of argumentation. However, it proved difficult to make the decisive step backwards. The Concert of Europe was dead  – or, to use the diction of war  – had remained ‘on the field of honour’. It is probably out of the question that Emperor Karl wished to consciously take action to counter the unleashing of the war. However, this is what it amounted to. Karl knew nothing of the steps that had led to the unleashing of the war. For that reason, what he had been keen to set in motion with a certain degree of naivety, and for which to him, neither the ‘official’ Austria-Hungary nor Germany appeared to offer the necessary leverage, may not have been a systematic counter-activity, but Karl certainly wanted to ‘unleash’ the peace. For him, it was clearly the case that while in military terms, Austria-Hungary had not yet reached the end, its civilian resources had been used up. After a year of attempts at concluding a peace, the Austrian Emperor was forced to acknowledge that his efforts had been futile, however. The peace would not be unleashed. And in a highly critical moment, when the secure world of the Imperial and Royal Army suddenly transformed into the opposite, Karl was overtaken by the past from just one year previously. What became known as the ‘Sixtus Affair’ was of importance far less as a result of the peace feelers on which it was founded, than due to the fact of its becoming known and the consequences resulting from it. The contact between Emperor Karl and his wife’s brothers, who were to help raise attempts at taking steps towards peace at a
zurück zum  Buch THE FIRST WORLD WAR - and the End of the Habsburg Monarchy, 1914 – 1918"
THE FIRST WORLD WAR and the End of the Habsburg Monarchy, 1914 – 1918
Entnommen aus der FWF-E-Book-Library