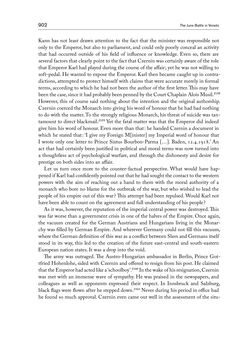 902 The June Battle in Veneto Kann has not least drawn attention to the fact that the minister was responsible not only to the Emperor, but also to parliament, and could only poorly conceal an activity that had occurred outside of his field of influence or knowledge. Even so, there are several factors that clearly point to the fact that Czernin was certainly aware of the role that Emperor Karl had played during the course of the affair ; yet he was not willing to soft-pedal. He wanted to expose the Emperor. Karl then became caught up in contra- dictions, attempted to protect himself with claims that were accurate merely in formal terms, according to which he had not been the author of the first letter. This may have been the case, since it had probably been penned by the Court Chaplain Alois Musil.2158 However, this of course said nothing about the intention and the original authorship. Czernin coerced the Monarch into giving his word of honour that he had had nothing to do with the matter. To the strongly religious Monarch, his threat of suicide was tan- tamount to direct blackmail.2159 Yet the fatal matter was that the Emperor did indeed give him his word of honour. Even more than that : he handed Czernin a document in which he stated that : ‘I give my Foreign M[inister] my Imperial word of honour that I wrote only one letter to Prince Sixtus Bourbon-Parma […]. Baden, 12.4.1918.’ An act that had certainly been justified in political and moral terms was now turned into a thoughtless act of psychological warfare, and through the dishonesty and desire for prestige on both sides into an affair. Let us turn once more to the counter-factual perspective. What would have hap- pened if Karl had confidently pointed out that he had sought the contact to the western powers with the aim of reaching out a hand to them with the moral authority of a monarch who bore no blame for the outbreak of the war, but who wished to lead the people of his empire out of this war ? This attempt had been repulsed. Would Karl not have been able to count on the agreement and full understanding of his people ? As it was, however, the reputation of the imperial central power was destroyed. This was far worse than a government crisis in one of the halves of the Empire. Once again, the vacuum created for the German Austrians and Hungarians living in the Monar- chy was filled by German Empire. And wherever Germany could not fill this vacuum, where the German definition of this war as a conflict between Slavs and Germans itself stood in its way, this led to the creation of the future east-central and south-eastern European nation states. It was a drop into the void. The army was outraged. The Austro-Hungarian ambassador in Berlin, Prince Got- tfried Hohenlohe, sided with Czernin and offered to resign from his post. He claimed that the Emperor had acted like a ‘schoolboy’.2160 In the wake of his resignation, Czernin was met with an immense wave of sympathy. He was praised in the newspapers, and colleagues as well as opponents expressed their respect. In Innsbruck and Salzburg, black flags were flown after he stepped down.2161 Never during his period in office had he found so much approval. Czernin even came out well in the assessment of the situ-
zurück zum  Buch THE FIRST WORLD WAR - and the End of the Habsburg Monarchy, 1914 – 1918"
THE FIRST WORLD WAR and the End of the Habsburg Monarchy, 1914 – 1918
Entnommen aus der FWF-E-Book-Library