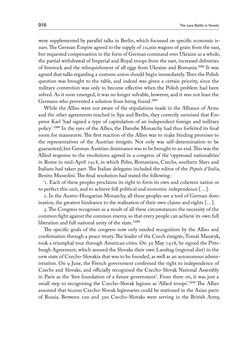 916 The June Battle in Veneto were supplemented by parallel talks in Berlin, which focussed on specific economic is- sues. The German Empire agreed to the supply of 10,000 wagons of grain from the east, but requested compensation in the form of German command over Ukraine as a whole, the partial withdrawal of Imperial and Royal troops from the east, increased deliveries of livestock and the relinquishment of all eggs from Ukraine and Romania.2206 It was agreed that talks regarding a customs union should begin immediately. Then the Polish question was brought to the table, and indeed was given a certain priority, since the military convention was only to become effective when the Polish problem had been solved. As it soon emerged, it was no longer solvable, however, and it was not least the Germans who prevented a solution from being found.2207 While the Allies were not aware of the stipulations made in the Alliance of Arms and the other agreements reached in Spa and Berlin, they correctly surmised that Em- peror Karl ‘had signed a type of capitulation of an independent foreign and military policy’.2208 In the eyes of the Allies, the Danube Monarchy had thus forfeited its final room for manoeuvre. The first reaction of the Allies was to make binding promises to the representatives of the Austrian émigrés. Not only was self-determination to be guaranteed, but German Austrian dominance was to be brought to an end. This was the Allied response to the resolutions agreed in a congress of the ‘oppressed nationalities’ in Rome in mid-April 1918, in which Poles, Romanians, Czechs, southern Slavs and Italians had taken part. The Italian delegates included the editor of the Popolo d’Italia, Benito Mussolini. The final resolution had stated the following : ‘1. Each of these peoples proclaims its right to form its own and coherent nation or to perfect this unit, and to achieve full political and economic independence […]. 2. In the Austro-Hungarian Monarchy, all these peoples see a tool of German dom- ination, the greatest hindrance to the realisation of their own claims and rights […]. 3. The Congress recognises as a result of all these circumstances the necessity of the common fight against the common enemy, so that every people can achieve its own full liberation and full national unity of the state.’2209 The specific goals of the congress now only needed recognition by the Allies and confirmation through a peace treaty. The leader of the Czech émigrés, Tomáš Masaryk, took a triumphal tour through American cities. On 30 May 1918, he signed the Pitts- burgh Agreement, which assured the Slovaks their own Landtag (regional diet) in the new state of Czecho-Slovakia that was to be founded, as well as an autonomous admin- istration. On 9 June, the French government confirmed the right to independence of Czechs and Slovaks, and officially recognised the Czecho-Slovak National Assembly in Paris as the ‘first foundation of a future government’. From there on, it was just a small step to recognising the Czecho-Slovak legions as ‘Allied troops’.2210 The Allies assumed that 60,000 Czecho-Slovak legionaries could be stationed in the Asian parts of Russia. Between 200 and 300 Czecho-Slovaks were serving in the British Army,
zurück zum  Buch THE FIRST WORLD WAR - and the End of the Habsburg Monarchy, 1914 – 1918"
THE FIRST WORLD WAR and the End of the Habsburg Monarchy, 1914 – 1918
Entnommen aus der FWF-E-Book-Library