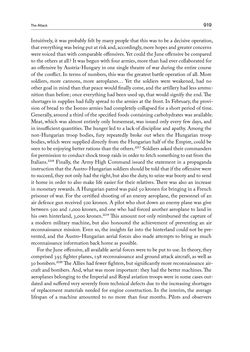 The﻿ Attack 919 Intuitively, it was probably felt by many people that this was to be a decisive operation, that everything was being put at risk and, accordingly, more hopes and greater concerns were voiced than with comparable offensives. Yet could the June offensive be compared to the others at all ? It was begun with four armies, more than had ever collaborated for an offensive by Austria-Hungary in one single theatre of war during the entire course of the conflict. In terms of numbers, this was the greatest battle operation of all. More soldiers, more cannons, more aeroplanes… Yet the soldiers were weakened, had no other goal in mind than that peace would finally come, and the artillery had less ammu- nition than before ; once everything had been used up, that would signify the end. The shortages in supplies had fully spread to the armies at the front. In February, the provi- sion of bread to the Isonzo armies had completely collapsed for a short period of time. Generally, around a third of the specified foods containing carbohydrates was available. Meat, which was almost entirely only horsemeat, was issued only every few days, and in insufficient quantities. The hunger led to a lack of discipline and apathy. Among the non-Hungarian troop bodies, fury repeatedly broke out when the Hungarian troop bodies, which were supplied directly from the Hungarian half of the Empire, could be seen to be enjoying better rations than the others.2217 Soldiers asked their commanders for permission to conduct shock troop raids in order to fetch something to eat from the Italians.2218 Finally, the Army High Command issued the statement in a propaganda instruction that the Austro-Hungarian soldiers should be told that if the offensive were to succeed, they not only had the right, but also the duty, to seize war booty and to send it home in order to also make life easier for their relatives. There was also an increase in monetary rewards. A Hungarian patrol was paid 50 kronen for bringing in a French prisoner of war. For the certified shooting of an enemy aeroplane, the personnel of an air defence gun received 500 kronen. A pilot who shot down an enemy plane was give between 500 and 1,000 kronen, and one who had forced another aeroplane to land in his own hinterland, 3,000 kronen.2219 This amount not only reimbursed the capture of a modern military machine, but also honoured the achievement of preventing an air reconnaissance mission. Even so, the insights far into the hinterland could not be pre- vented, and the Austro-Hungarian aerial forces also made attempts to bring as much reconnaissance information back home as possible. For the June offensive, all available aerial forces were to be put to use. In theory, they comprised 395 fighter planes, 198 reconnaissance and ground attack aircraft, as well as 30 bombers.2220 The Allies had fewer fighters, but significantly more reconnaissance air- craft and bombers. And, what was more important : they had the better machines. The aeroplanes belonging to the Imperial and Royal aviation troops were in some cases out- dated and suffered very severely from technical defects due to the increasing shortages of replacement materials needed for engine construction. In the interim, the average lifespan of a machine amounted to no more than four months. Pilots and observers
zurück zum  Buch THE FIRST WORLD WAR - and the End of the Habsburg Monarchy, 1914 – 1918"
THE FIRST WORLD WAR and the End of the Habsburg Monarchy, 1914 – 1918
Entnommen aus der FWF-E-Book-Library