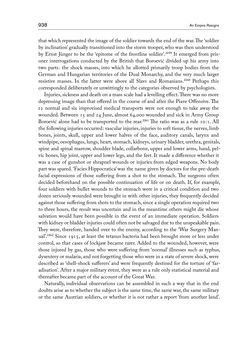 938 An Empire Resigns that which represented the image of the soldier towards the end of the war. The ‘soldier by inclination’ gradually transitioned into the storm trooper, who was then understood by Ernst Jünger to be the ‘epitome of the frontline soldier’.2259 It emerged from pris- oner interrogations conducted by the British that Boroević divided up his army into two parts : the shock masses, into which he allotted primarily troop bodies from the German and Hungarian territories of the Dual Monarchy, and the very much larger resistive masses. In the latter were above all Slavs and Romanians.2260 Perhaps this corresponded deliberately or unwittingly to the categories observed by psychologists. Injuries, sickness and death on a mass scale had a levelling effect. There was no more depressing image than that offered in the course of and after the Piave Offensive. The 22 normal and six improvised medical transports were not enough to take away the wounded. Between 15 and 24 June, almost 64,000 wounded and sick in Army Group Boroević alone had to be transported to the rear.2261 The ratio was as a rule 10 :1. All the following injuries occurred : vascular injuries, injuries to soft tissue, the nerves, limb bones, joints, skull, upper and lower halves of the face, auditory canals, larynx and windpipe, oesophagus, lungs, heart, stomach, kidneys, urinary bladder, urethra, genitals, spine and spinal marrow, shoulder blade, collarbone, upper and lower arms, hand, pel- vic bones, hip joint, upper and lower legs, and the feet. It made a difference whether it was a case of gunshot or shrapnel wounds or injuries from edged weapons. No body part was spared. ‘Facies Hippocratica’ was the name given by doctors for the pre-death facial expressions of those suffering from a shot to the stomach. The surgeons often decided beforehand on the possible continuation of life or on death. If, for example, four soldiers with bullet wounds to the stomach were in a critical condition and two dozen seriously wounded were brought in with other injuries, they frequently decided against those suffering from shots to the stomach, since a single operation required two to three hours, the result was uncertain and in the meantime others might die whose salvation would have been possible in the event of an immediate operation. Soldiers with kidney or bladder injuries could often not be salvaged due to the unspeakable pain. They were, therefore, handed over to the enemy, according to the ‘War Surgery Man- ual’.2262 Since 1915, at least the tetanus bacteria had been brought more or less under control, so that cases of lockjaw became rarer. Added to the wounded, however, were those injured by gas, those who were suffering from ‘normal’ illnesses such as typhus, dysentery or malaria, and not forgetting those who were in a state of severe shock, were described as ‘shell-shock sufferers’ and were frequently destined for the torture of ‘far- adisation’. After a major military event, they were as a rule only statistical material and thereafter became part of the account of the Great War. Naturally, individual observations can be assembled in such a way that in the end doubts arise as to whether the subject is the same time, the same war, the same military or the same Austrian soldiers, or whether it is not rather a report ‘from another land’.
zurück zum  Buch THE FIRST WORLD WAR - and the End of the Habsburg Monarchy, 1914 – 1918"
THE FIRST WORLD WAR and the End of the Habsburg Monarchy, 1914 – 1918
Entnommen aus der FWF-E-Book-Library